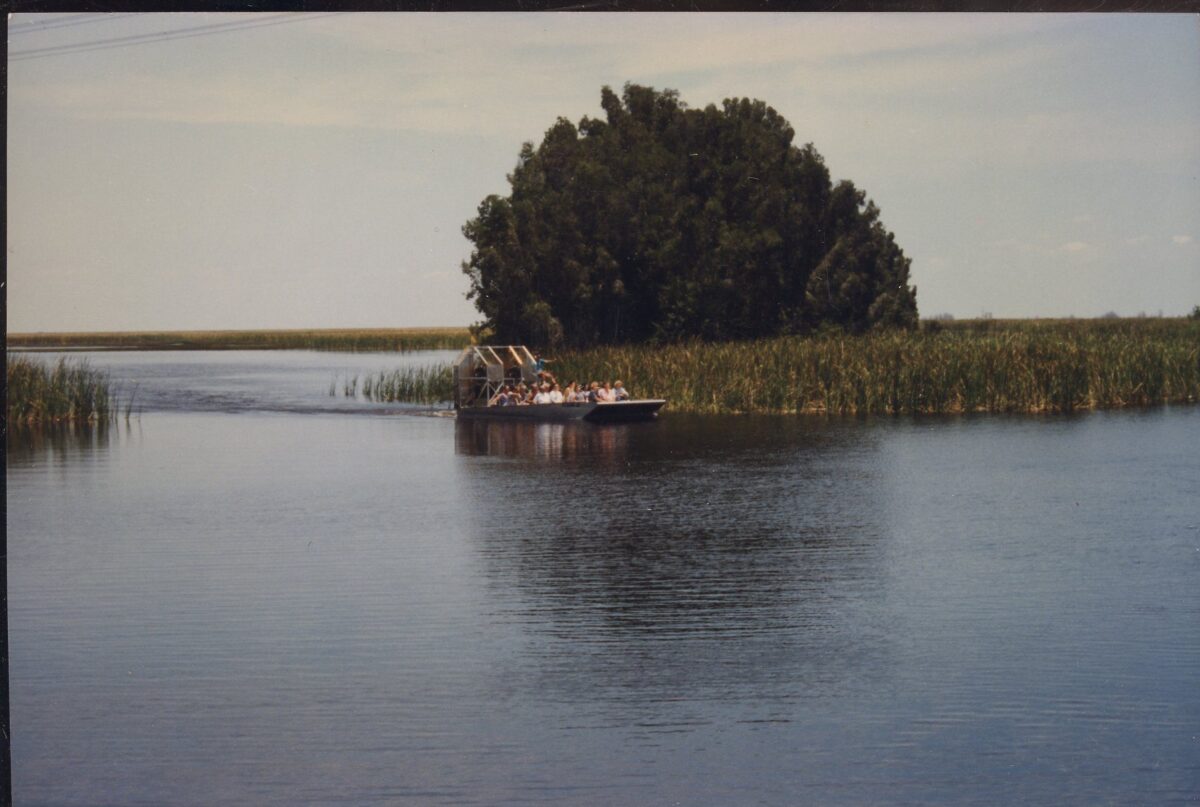 Winter has come to the Everglades! This time of year is perfect for spending time with family, friends, and loved ones relaxing. With the holiday season being over, have you thought about how to continue having the best Florida winter ever? This week, join us to explore the top five things you can do to create special winter memories. From upcoming events, activity ideas, to current exhibits, there is something for everyone here in Florida this winter!

In our featured image this week, you can see a group taking an airboat ride, possibly at Billie Swamp Safari (ATTK Catalog 2015.6.8488).  Below, you can see an osprey nest (and osprey!) in Everglades National Park. 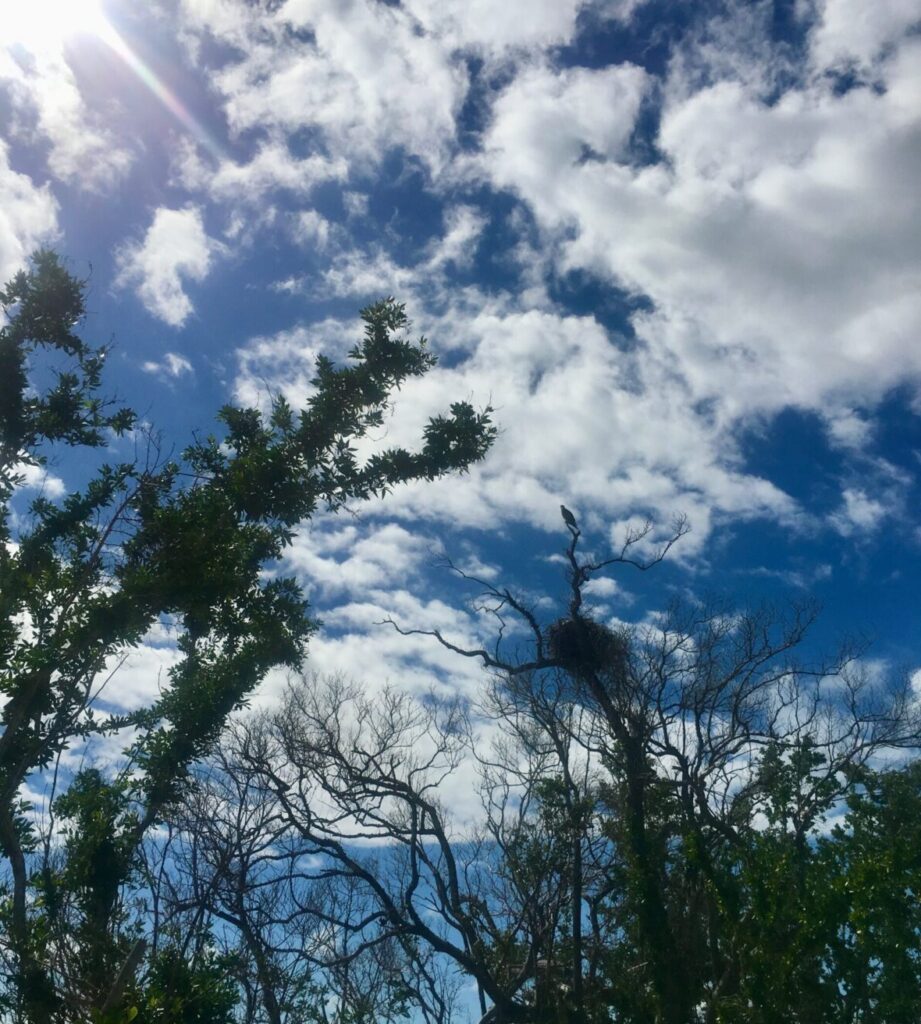 The Everglades in the Dry Season

Winter is one of the best times to experience Florida and the Everglades. With mild temperatures and relatively low humidity, many visit to escape harsh winter weather. Florida is popular in the winter for out-of-state snowbirds for a reason! In the Everglades, the average temperature ranges from highs of 77 degrees Fahrenheit to lows of 53 degrees Fahrenheit from November to April. This is a sharp contrast to the sub-tropical heat of only a few months before. Fall and winter are a transition from the wetter, humid weather of the summer to the cooler, drier weather of dry season. In a previous blog post, we explored some of these changes that happen to the Everglades in the Fall. With hurricane season ending November 30th, average rainfall also takes a sharp turn down. Only a quarter of South Florida’s annual precipitate occurs in dry season.

Winter in the Everglades is also perfect for animal spotting, as lower water levels leave less room for animals to hide. In the winter, you can spot alligators, snakes, otters, birds, marsh rabbits, deer, fox, manatees, wintering birds, bobcats, and more. It is also a great season to observe a large variety of birds. Along the coastline, common loons, red-throated loons, horned grebes, and pied-billed grebes can be spotted in winter. American bitterns find refuge in the sawgrass marshes of the Everglades. Mourning doves, northern cardinals, blue jays, red-bellied woodpeckers, red-winged blackbirds, and common grackles are common. A variety of warblers also descend upon South Florida to spend the winter. Lesser nighthawks, bald eagles, osprey, and owls are common sights in the Everglades. So, take your guidebook to identify as many birds and animals as possible on your Everglades adventure!

Top Six Things to Do in the Everglades this Winter

Driving across Tamiami Trail has been popular since it opened on April 26, 1928. Cutting across the Everglades from Tampa, down to Fort Myers, and across to Miami, the Trail provided an open road for tourists to navigate South Florida. Seminole and Miccosukee tourist camps began to spring up in the early 1920s and 1930s, taking advantage of the Trail’s popularity. These tourist camps would help Seminoles cement their economic independence and agency in the early 20th century, and were incredibly important to the history of the Tribe. Now, major freeways have replaced regular use of the Trail. But, many tourists still make Tamiami Trail a prominent feature of their vacation. Miccosukee Indian Village, Smallwood Store at Chokoloskee, Big Cypress National Preserve, and Everglades National Park are all must-see stops along Tamiami Trail.

Although water levels are lower, taking an airboat ride is still a great option during the winter. They are a uniquely ‘Florida’ way to experience the Everglades, and perfect for spotting winter birds and animals. Airboats began to be popular in Florida in the 1930s and 1940s, as a simple, fast way Seminoles could skim over low water to hunt frogs (West 191). Seminoles made and developed their own airboats as a faster alternative to traditional boats. Although the frog meat trade is no longer as popular, they have stuck around as a unique tourist experience that persists today. Above, you can see an airboat on the water in a swampy area. It was possibly taken on the Big Cypress Reservation at Billie Swamp Safari. Although Billie Swamp Safari is temporarily closed, there are several opportunities for an airboat ride along Tamiami Trail.

Experience the beauty and wonder of an Everglades winter at one of Florida’s most unique parks and preserves. Spot wildlife and animals, take a canoe ride, and hike through the swamp for a fun Florida experience.

Everglades National Park is one of the most unique ecosystems in the world, and the largest subtropical wilderness in the United States. Celebrating its 75th Anniversary this year, the park is a World Heritage Site, International Biosphere Reserve, a Wetland of International Importance, and a specially protected area under the Cartagena Treaty. From hardwood hammocks to mangrove forests, this 1.5 million-acre wetland preserve is one of the most biologically diverse places in the world. It provides habitat for various plants and animals, including endangered ones like manatees, the Florida panther, and American crocodiles. It is a must-see stop. Winter is especially exciting, as ranger-led programs and educational events are in full swing. Sign up for a slough slog, bike ride, or canoe trip!

Just down the road from Everglades National Park on Tamiami Trail, the Big Cypress National Preserve is an equally important and worthwhile natural refuge in South Florida. Covering 729,000 acres of the Big Cypress Swamp, BCNP is a habitat for various plants and animals. This includes over 35 types of orchids, including the famous Ghost orchid. As a National Preserve, BCNP is slightly different from a National Park. In addition to protecting resources, they also allow certain activities, such hunting, if natural values are preserved. The Seminole and Miccosukee Tribes also both have traditional and customary use rights in BCNP, which you can learn more about here.

Check out the Ah-Tah-Thi-Ki Museum

Come visit the Ah-Tah-Thi-Ki Museum this winter season! Recently celebrating its 25th anniversary, the Ah-Tah-Thi-Ki Museum works to share Seminole history and culture through various exhibits, events, and learning opportunities for the whole family. Full of family-friendly fun, winter is the perfect time to experience the Big Cypress Reservation and the Ah-Tah-Thi-Ki Museum. Walk the boardwalk, check out the exhibits, and shop the Museum store and from the artisans in the Village.  Seminole Pride: Celebrating the Artwork of Jimmy Osceola opens next week and will run through March 2023.  Don’t forget to enjoy your drive down Snake Road to spot wintering birds and alligators.

Scheduled to run through January 10, 2023, this exhibit was created in partnership with the Ah-Tah-Thi-Ki Museum. This is the ninth art exhibition History Fort Lauderdale has done in partnership with Tribal Members. It highlights entirely new work, which includes contemporary and traditional media utilizing oils, acrylics, wood, fiber, glass, metals, mixed media, and digital art. Tara Chadwick, the curator of exhibitions at History Fort Lauderdale, curated the exhibit. It features 60 pieces by 20 Seminole artists.

Fumecheliga: A History of the First Peoples of Florida at Art & History Museums Maitland (Maitland, FL)

Opened September 23, 2022, this exhibit explores “Florida’s beginnings through the indigenous cultures that inhabited it.” Items from the Ah-Tah-Thi-Ki Museum permanent collection are on loan for the exhibit. These include a patchwork skirt, cape, and coat, a map by Guy LaBree, a palmetto sifting basket, and a historic powder horn. Additionally, copies of 20th century postcards from the Ah-Tah-Thi-Ki Museum, as well as a reproduction of the famous 1774 “Cowkeeper Letter” are also included. The exhibit is co-curated by Seminole State College professor Dr. Neil Vaz and A&H’s Exhibitions Manager Katie Benson. It will run through February 5, 2023.

Interested in learning how this exhibit came to be? Check out a Seminole Tribune article here to learn how this collaboration came to fruition.

For the purposes of this article, the author accessed this source digitally. Page reference numbers may not align with paper and hardback copies. 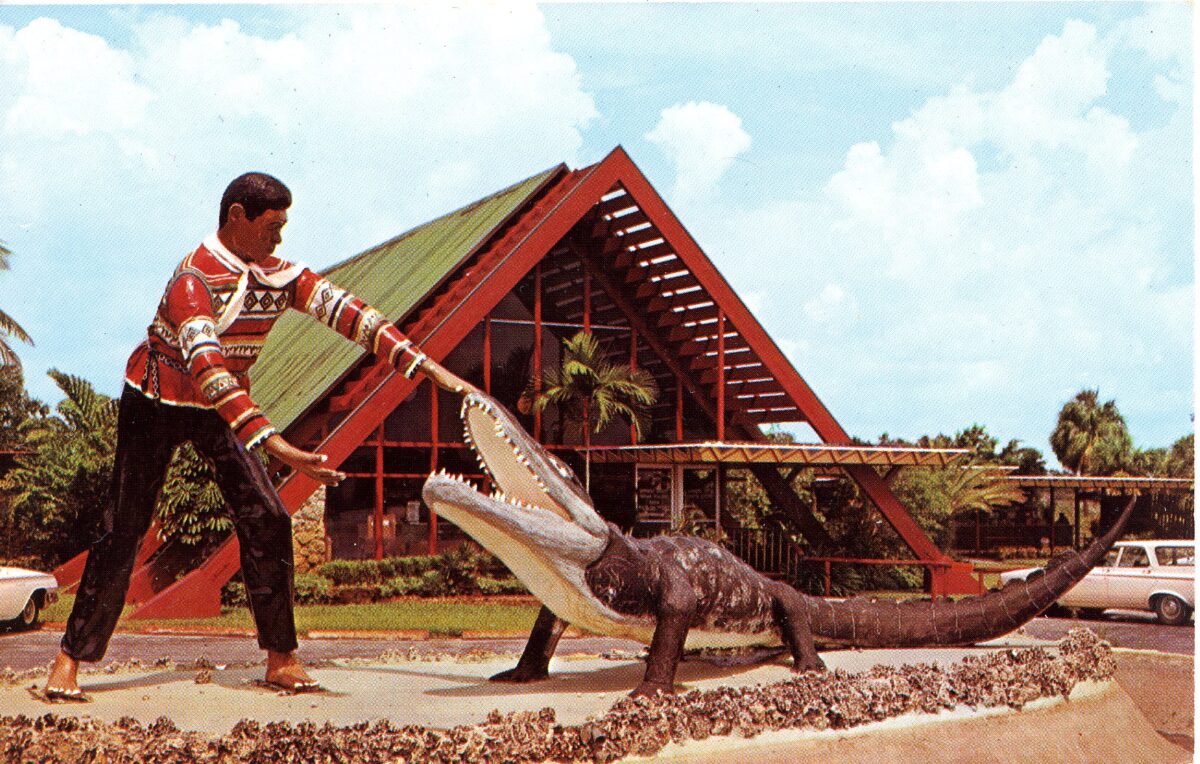