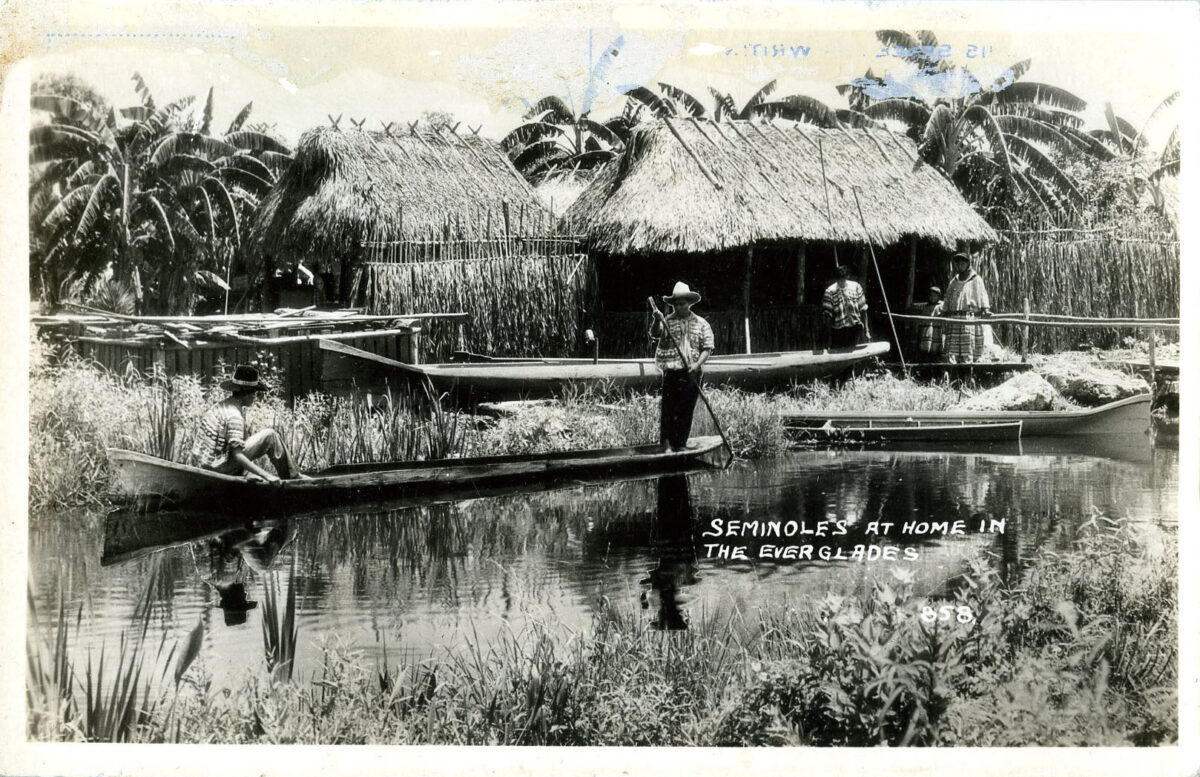 Seminole ancestors have been in Florida for thousands of years. While the Seminole Tribe of Florida was officially established in 1957, they have been here much, much longer. Along with the Miccosukee Tribe, the Seminole people share a deep connection with the land, animals, and natural resources of Florida. But, did you know that with that history and deep connection comes additional rights on certain federal lands in Florida? Within Big Cypress National Preserve (BCNP) in South Florida, Seminole and Miccosukee people hold traditional and customary use rights. Join us this week as we learn more about Big Cypress National Preserve and customary use rights within it! 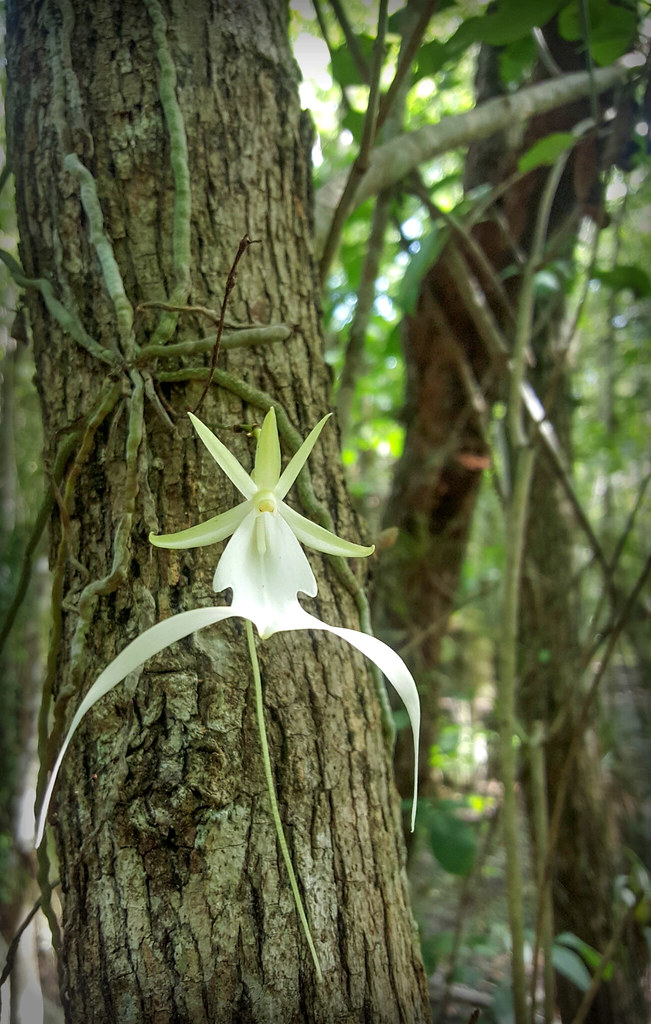 Located west of Miami, the Big Cypress National Preserve encompasses 729,000 acres of swampland. According to the National Park Service (NPS), over one million visitors come to the preserve annually. That is a lot of people! There are five distinct habitats within the preserve, all interconnected through the flow of water. They are: the hardwood hammock, pinelands, prairie, cypress swamp, and estuaries. All five of the habitats support their own important plant and animal communities. With a range of elevation from 0 to ~17ft above sea level, they also have different water levels throughout the dry and wet seasons from each other. The preserve also has one of the largest Wildland Fire programs in the Park System. Roughly 66,000 acres are burned annually. Like other natural processes such as hurricanes, rain, and wind, fire is important to the health of the ecosystem.

This freshwater swamp ecosystem supports a wide variety of diverse plants and animals, like the rest of the Everglades. These include 35 species of mammals, over 190 species of birds, and 51 species of reptiles. The Florida panther, Florida manatee, Florida black bear, and Big Cypress fox squirrel are all found in the preserve. While many of these animals generally prefer drier landscapes, the preserve offers a safe habitat. Many of these animals have adjusted to life in the Big Cypress swamp for the sake of safety. BCNP also supports a variety of plants. Air plants and periphyton are plentiful. Red mangroves throughout the park provide shelter for many marine animals and birds. Over 90% of Florida’s commercially harvested fish depend on these marine estuaries. More than 30 types of orchids, including the famous Ghost Orchid, call BCNP home. Management on hunting, fishing, and plant collecting protect these fragile populations. 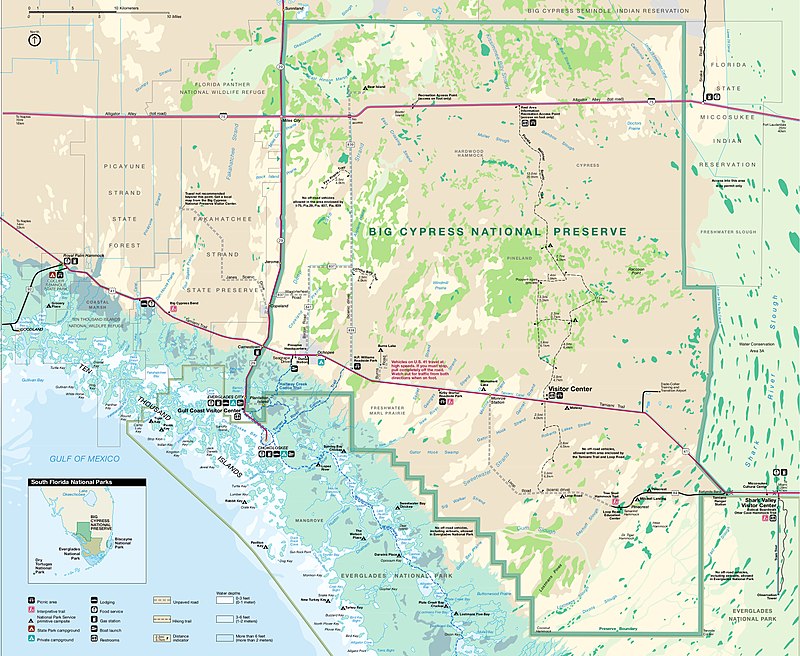 History of the Preserve

Big Cypress National Preserve was established in 1974. Although originally intended to be part of Everglades National Park (est. 1947), much of it was still held by private land owners. In the 1960s, plans to build a large JetPort, the largest airport in the world, were unveiled.  A report was ordered to understand the potential impacts of the project. The report,  released in 1969,  states that the project “will inexorably destroy the south Florida ecosystem and thus the Everglades National Park.” With the threat of increased development looming, activists in tribal, state, and federal government, and private sectors worked to block the project. After stopping construction, they then petitioned to place land management under the National Park Service. But, many felt that folding it into Everglades National Park would be too restrictive. As a result, Big Cypress National Preserve was established.

While it is part of the National Park System, BCNP is not a National Park. Preserves are multi-use lands, and allow different activities on them than National Parks. Big Cypress was one of the very first national preserves along with the Big Thicket National Preserve in Texas. The intention of preserves is to protect natural resources, while still allowing some resource stripping activities like hunting, mining, and cattle grazing. Resource extracting activities are highly regulated in preserves, as the priority is still to ensure the sustainability of the land. These activities are not allowed in national parks. Each preserve in the Unites States is unique, with different restrictions and boundaries around what is allowed. There are 19 designated national preserves and two reserves in the Unites States. All of them are primarily managed by the National Park Service (NPS). Eleven of these are co-managed by other national parks or monuments.

So…What are Seminole Customary Use Rights in BCNP?

When Big Cypress National Preserve was established, many did not want it to merely become part of  Everglades National Park. Park land operates on a different administrative level, and activities that BCNP was customarily used for would not be allowed. There were six overarching uses that they tried to protect. They were: oil and gas exploration, hunting, off road vehicle use, private land ownership, cattle grazing, and traditional and customary uses by the Seminole and Miccosukee tribes. These activities were happening on the preserve land prior to it becoming a National Preserve. Therefore, in order to guarantee these activities could continue, it was not folded into the national park boundaries. BCNP was established, and the activities are allowed by Congress through its enabling legislation. Since BCNP was the one of the first preserves in the United States, it set an important precedent.

Seminole and Miccosukee people can utilize the resources of BCNP as their ancestors did. Timber harvesting, and other plant and animal harvesting, are allowed. They also reserve the right to occupy land within the preserve, and have first rights for developing businesses related to the resources within it. This includes guided airboat and swamp buggy tours, many of which you can see  dotting the sides of Tamiami Trail. Seminole and Miccosukee people may fish, hunt, trap, and utilize resources as their culture dictates. They also may occupy and utilize the land for ceremonial reasons. The well-defined history of occupation and use of this land further supports these rights through customary law. These, and the other activities listed above, are allowed to continue as long as they do not harm the natural ecosystem. 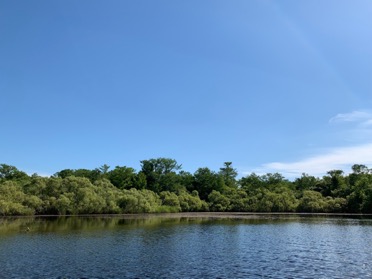 As with most legislation, the interpretation and wording were parsed apart for decades to come. The 1974 public law states that Seminole and Miccosukee tribal members “shall be permitted, subject to reasonable regulations established by the Secretary, to continue their usual and customary use and occupancy of Federal or federally acquired lands and waters within the preserve, including hunting fishing, and trapping on a subsistence basis and traditional tribal ceremonies.” Additionally, “before entering into any contract or agreement to provide new revenue producing visitor services, the Secretary shall offer [the Miccosukee and Seminole tribes] the right of first refusal to provide these services.” (U.S. Congress 1974 Public Law 93-440, Section 5) While this may seem simple, the wording has opened up the door for a lot of confusion. What is “reasonable regulation?” Does the Park Service have a clear definition of “usual and customary use” to tribal people?

Seminole and Miccosukee People in the Everglades

Seminole people and Seminole ancestors have occupied Florida for longer than recorded history. Oral histories, documents, and a well-established archaeological record all detail this long history of occupation. Although the population has grown and shrank, and they have been called by different names, it is an important fact that they are the first people of Florida. When so many tribes were ripped from their homes, Seminoles were the truly unconquered. Culturally from the same origins but politically distinct, the Miccosukee Tribe and the independent Seminoles also share these rights and connections. Now, the priority is keeping the culture and way of life alive. In the Seminole Tribe of Florida’s own words “the world has changed, as it always has, and we have adapted, as we always have; while keeping our ways, our culture, and our lives, to remain the Unconquered Seminole Tribe of Florida.”

Traditional and customary use rights are a vital part of this, as they protect the rights of the people to continue their cultural practices on their ancestral land. It is a sharply felt fact that the ancestral Seminole lands do not end at the boundaries of the reservations. Boundaries like this were indistinct prior to European colonization. Big Cypress National Preserve is bracketed by reservation land on two sides. The Big Cypress Seminole Reservation lies directly to the north. The Miccosukee Reservation directly to the east. Everglades National Park’s Ten Thousand Islands is to the south. Beyond the lines drawn today, it is clear to see why the land is precious to the Seminole people.

So, plan a visit to BCNP! And while you’re there, reflect a moment on how you interact within this priceless natural space to ensure a healthy ecosystem for years to come. 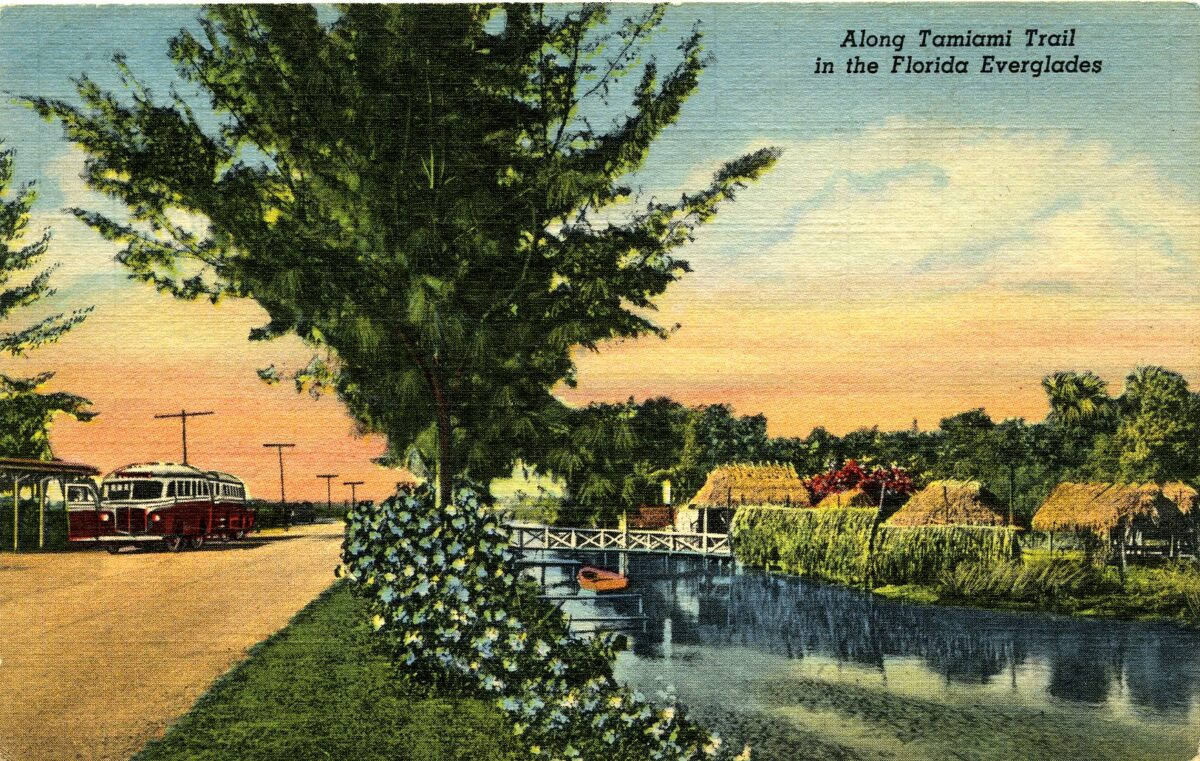 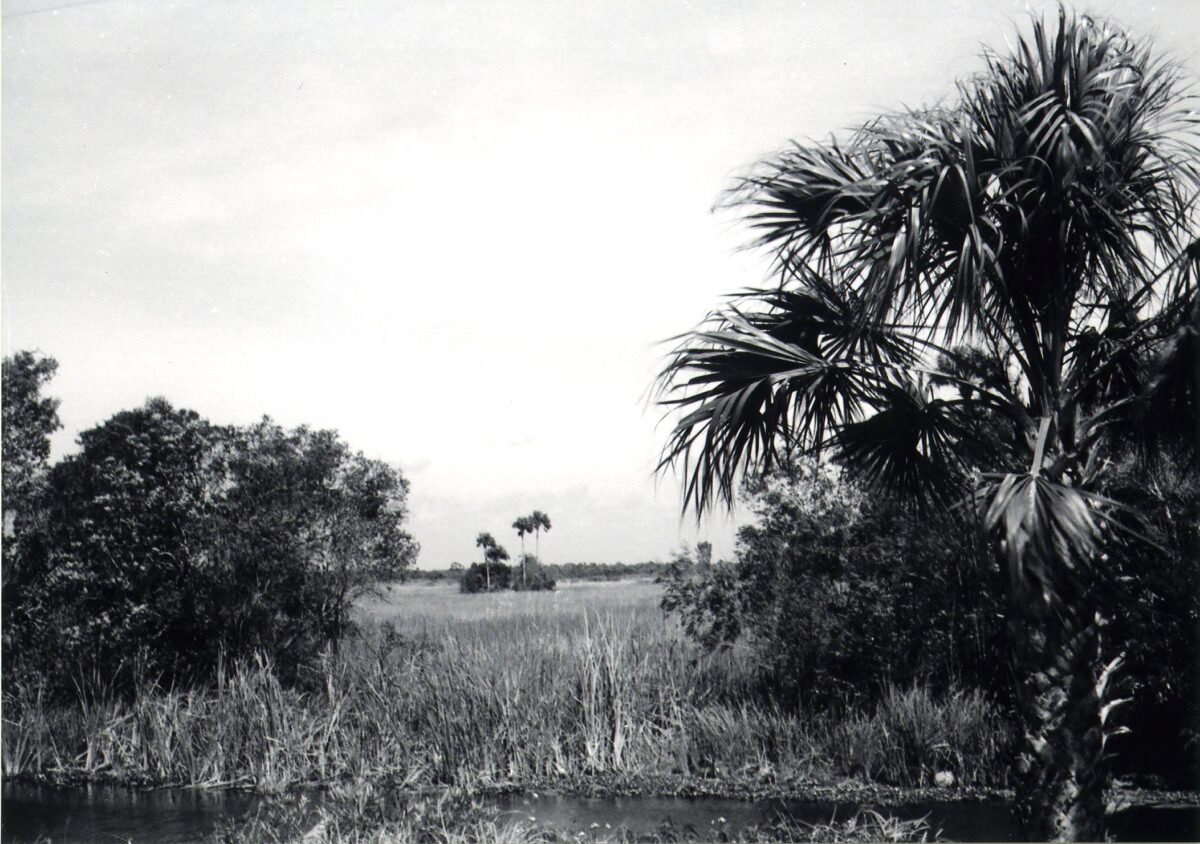