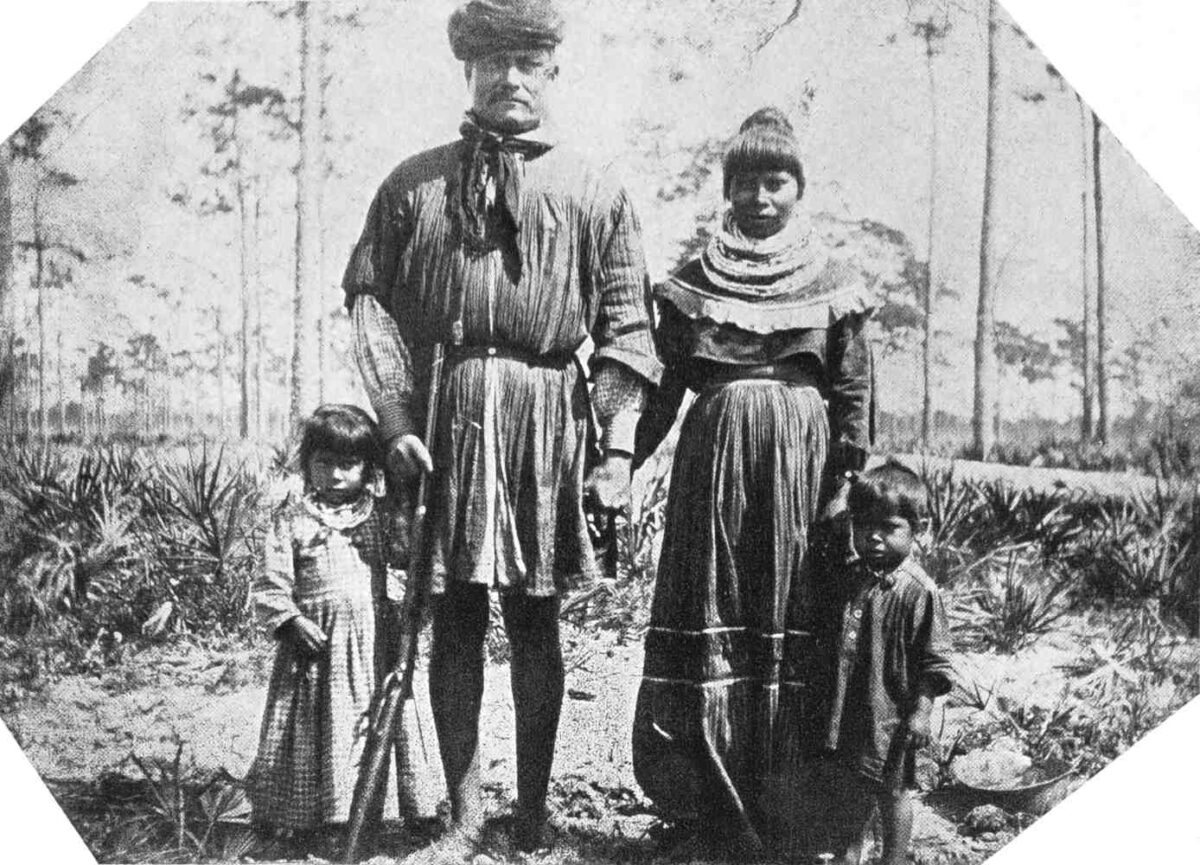 Welcome to the premiere of a brand-new blog series! This series will cover the history of Seminole tourism over the decades. The first post will span early 1900-1910 and detail the earliest evidence we have of a Seminole tourist camp, as well as the context of how it came to be. Tourist camps were a vital part of Seminole survival, and the impacts can be seen even today. Follow along as we learn more about Captain Tom Tiger and the start of Seminole tourism!

Leading up to the 1900s, conflicts between Seminoles and white settlers made relationships tense. A bloody and painful history marred the previous century. The Indian Removal Act of 1830 strengthened the power of the US government over native people. With it, they were able to justify the forced relocation, genocide, and fragmentation of tribes. The intention was to free hospitable land for white settlers. But, Seminole people already lived there.

For decades, Seminole people fought, hid, and survived the increasing pressure of the US Government. In the “Florida Seminole Wars Heritage Trail” publication, former Ah-Tah-Thi-Ki Museum Outreach Coordinator Pedro Zepeda states they “fought hard to stay in their homeland, never knowing when they might be captured or killed over the long years of the Seminole Wars.” The Third Seminole War officially lasted from 1855-1858. But, it was only the last in a long string of wars that decimated the Seminole population of Florida for over 40 years.

Zepeda further explains that “the Seminole Wars were viewed as a single struggle that lasted beyond the close of what history calls the Third Seminole War.” Only a few hundred unconquered Seminoles were left in the Everglades. Distrust ran deep, and they intentionally isolated themselves in the Everglades. Seminoles lived in traditional family camps with cypress and palmetto-thatched chickees, holding tight to their ways of life. But, trading posts began to crop up. An important economic opportunity, Seminoles could trade hides, feathers, crafts, and produce. Slowly, relationships began to form, like at Stranahan House on the New River in Fort Lauderdale. Trading posts acted as a crucial bridge between the Seminole and American settlers. Only a few years later, those relationships would spur the opening of the first Seminole Tourist camp.

The first Seminole tourist camp opened in March of 1904. Seminole leader Thlocklo Tustenugee established it on the South Fork of the Miami River. But many knew him as “Captain” Tom Tiger. Notices were sent to local newspapers, inviting interested locals and tourists alike. On March 7, 1904, the Miami Evening Record published an article about the camp (excerpt below). The article boasts that “a trip to Tom Tiger’s camp will repay the tourist.” A single column story, the brief article outlined the details of this first tourist camp. Visitors could see Seminole dancing, traditional crafts, and canoe making. The camp operated seasonally, with the highlight of the season being a guided “trip from Tom Tiger’s camp into the real sawgrass ponds of the Everglades in Seminole canoes.” Chickees were built to house the camp and Seminole demonstrators. 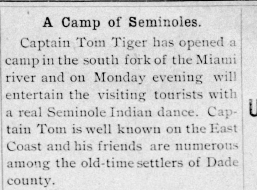 Excerpt from “A Camp of Seminoles”, Miami Evening Record, March 7,1904

Tom Tiger’s camp “is the first time in the history of the Seminoles of Florida that they have ever engaged to come before the public.” Organizing the tourist camp was incredibly impactful for their economic independence, as well as for the visibility of Seminoles in Florida. It became a successful community effort. Tom Tiger sought a merchant license from a local judge for the Tribe to sell goods. Many influential Seminoles helped run the camp. These included Frank Jumper, John Osceola, Sam Huff, Jackson Charlie, Willie Jumper, Jim Truitt, Young Ingraham, Clyde Tiger-tail, Little Tiger, and Cypress Tiger (STOF SHS, May 2022). The opening of this first camp planted a seed of what was to come. These visionaries would spur the beginning of Florida tourism and Seminole tourism. In just a few decades, Florida tourism, and Seminole tourism, would be driving economic forces within the Sunshine State.

Captain Tom Tiger impacted the trajectory of the Seminoles of Florida in many ways beyond just opening the first tourist camp. But, who was the man behind the camp, Tom Tiger? Thlocklo Tustenugee, known as “Captain” Tom Tiger, was a well-known Seminole War Veteran and leader of the Cow Creek Band of Seminoles. The article above shares that “Captain Tom is well known on the East Coast, and his friends are numerous.” In fact, all the articles that speak of Tom Tiger are glowing in their descriptions of him. On an expedition to find Lake Okeechobee in 1875 explorer Frederick Ober encountered Tom Tiger. He wrote “His eyes were black and fierce; his mouth firm, but not cruel, was shaded by a small black mustache. We soon made friends with him, and found him pleasant and gentle voiced” (p. 16). Beyond this, he was an important and influential Seminole leader.

Tom Tiger was “one of the first to make cautiously open contact with American settlers around Okeechobee and helped…to secure regular trade without giving up [the Tribe’s] location” (STOF SHS, May 2022). One of the few Seminoles who spoke English, Tom Tiger regularly spoke on behalf of his people and their concerns. Tom Tiger was also the first Seminole to take a white man to court. In 1898, Tom Tiger filed charges against a man named Hull for stealing his horse. Tiger had lent Hull his horse, who then refused to return it. Minnie Moore-Wilson wrote in her 1910 book The Seminoles of Florida that spectators of the case remarked Tiger presented “the most imposing picture they had ever witnessed” (p. 214). Although Tiger lost on a technicality, the barrier-breaking case had lasting impacts. It raised awareness of the realities of the Seminole experience, and the injustices perpetuated against them.

Seminole tourist camps were a vital economic resource during the early 20th century. In a previous blog post, we touched a bit on how the first Seminole tourist camps evolved. In response to a rapidly changing Florida, the Seminole people pivoted towards tourism to foster economic independence. The development and draining of the Everglades deeply impacted their ability to live as isolated as they had before. Resources became constricted, and it was not as easy to travel along the waterways and canals as the landscape changed. This signaled the end of the trading post era, simultaneously allowing more tourists and settlers to flock to Florida. Tamiami Trail was soon cut across the Everglades, and completed in 1928. You can learn more about how the Tamiami Trail helped shape Seminole Tourism here in a previous blog post.

Tom Tiger’s camp was only the first of many Seminole camps and attractions over the 20th century. It truly was ahead of its time, as camps such as these would not hit their peak in popularity until the Tamiami Trail linked all of South Florida. But, the effects of Tom Tiger’s endeavor were far reaching and planted the seeds for the future of Seminole tourism. 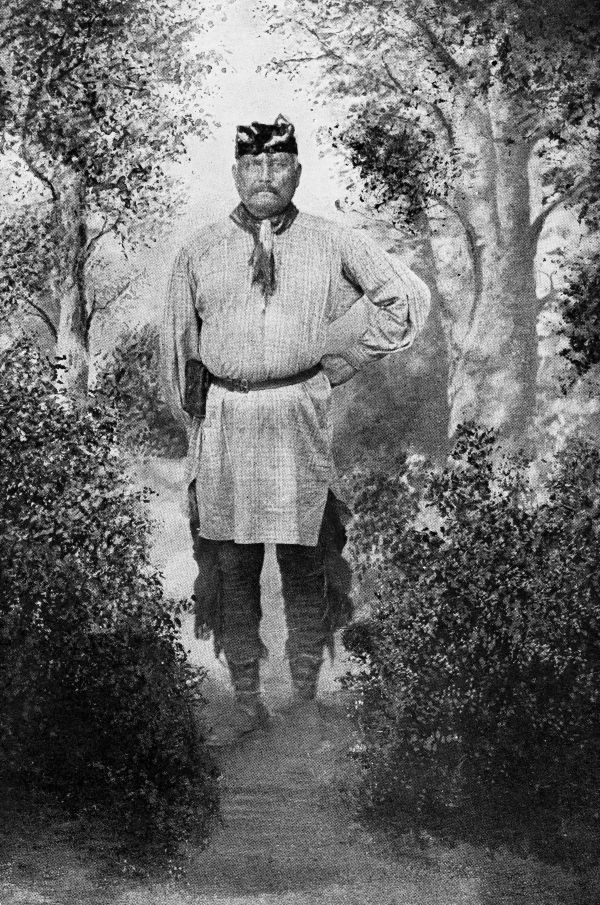 Over A Century of Seminole Tourism 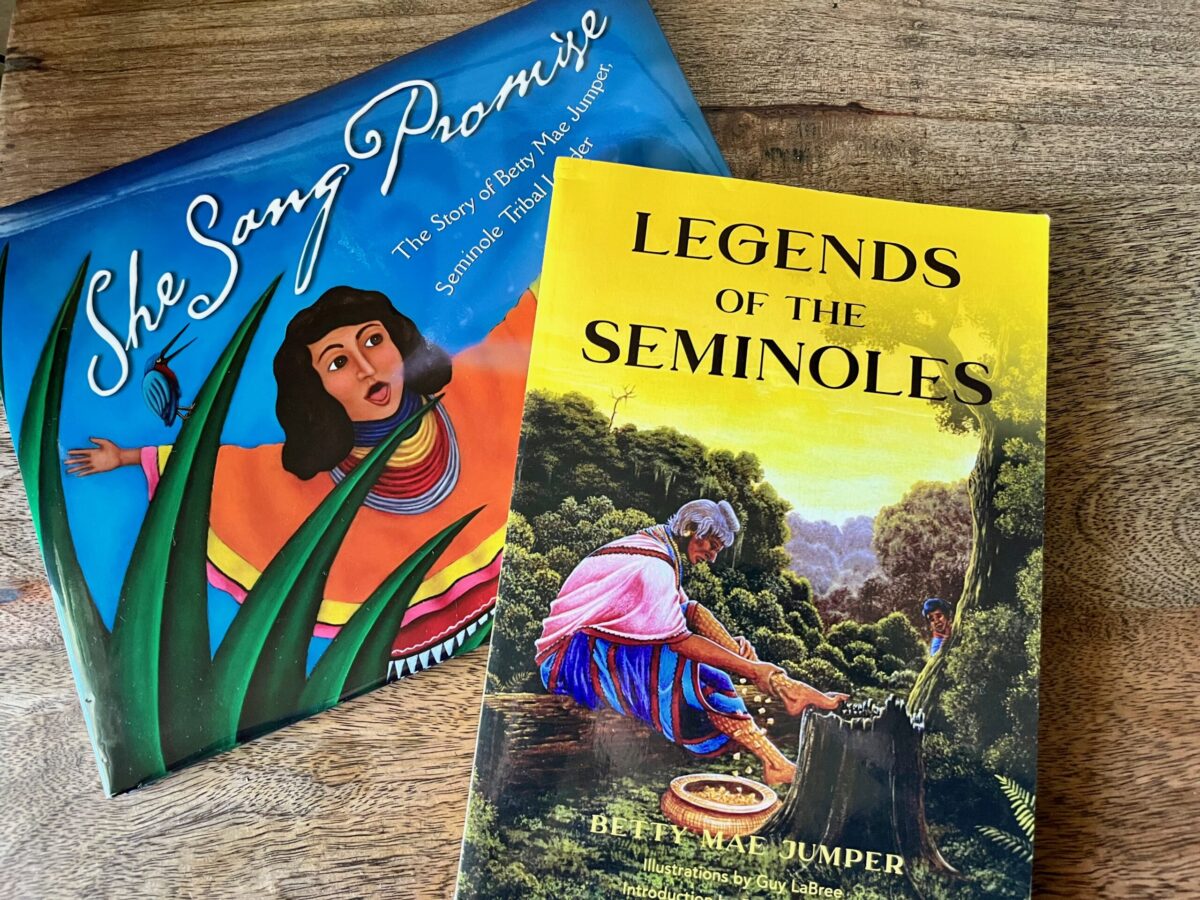 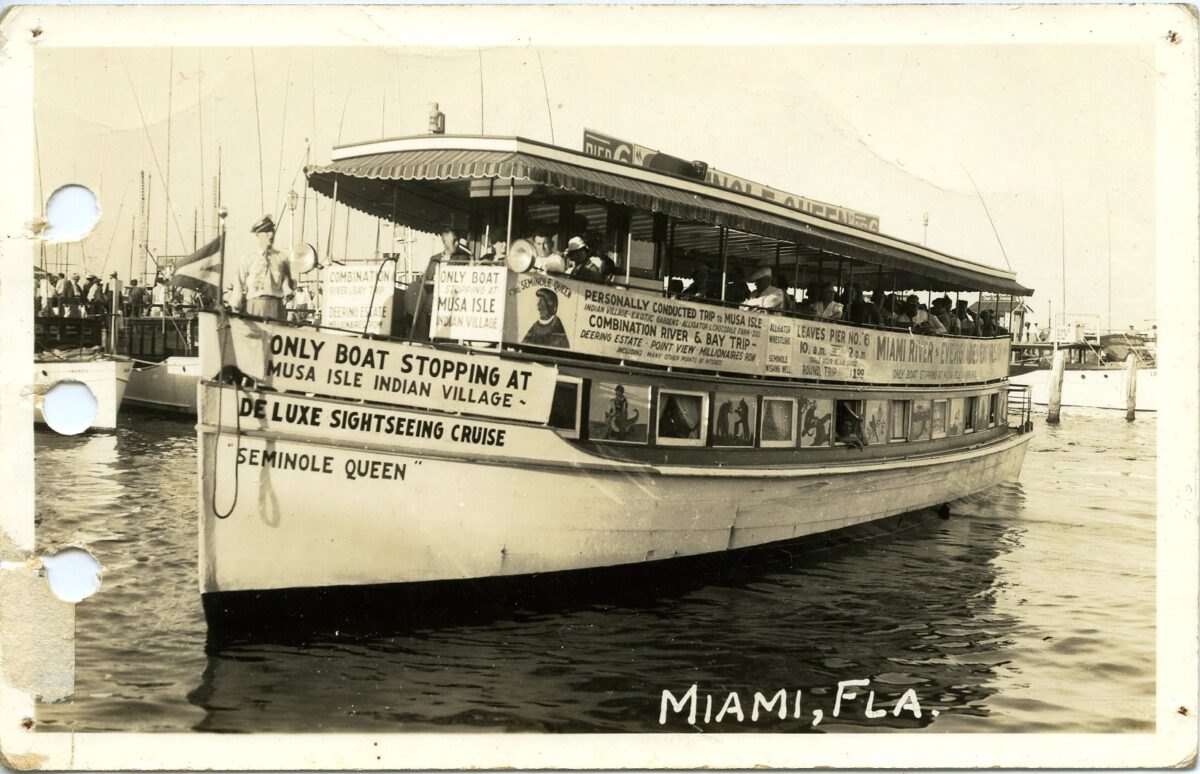