Hello! Welcome to our final installment of our 8 part series highlighting Seminole Tourism, past and present. Over the past 7 parts, we have been showcasing how tourism has been a key part of the Seminole entrepreneurial spirit for over a century using articles from The Seminole Tribune.  Our final article focuses on one family’s traditional sweetgrass basket making, and was published in 2013. 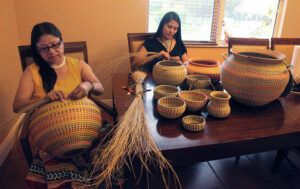 Photo via Seminole Tribune: Actor Kevin Costner has two, Dallas Cowboys owner Jerry Jones and comedian George Lopez each have one. Linda Beletso’s sweetgrass baskets are so fine, they can be found in the homes of the rich and famous.

IMMOKALEE — “My cousin went to a pow-wow in Orlando about 15 years ago,” said Beletso, of Immokalee. “I sent some baskets with him and Kevin Costner bought two. Richard Bowers gave Jerry Jones a basket last year and Paula Bowers Sanchez gave one to George Lopez at a golf tournament a few years ago. They are all over the world; I don’t know where they go.”

Beletso’s baskets are also on display in the Chairman’s Office and at the Ah-Tah-Thi-Ki Museum, and are easily identifiable by the delicacy of the coils of sweetgrass used to make the basket.

Basketry is a family affair for Beletso, who taught the craft to her daughter, Lorraine Posada, and her granddaughters, Lauren and Lindsey Posada. But making the iconic Seminole baskets isn’t as easy as picking up supplies at a local craft store. Sweetgrass must be found and harvested in the wild. Finding the sweetgrass, or Muhlenbergia filipes, is a challenging task.

The slender grass doesn’t grow in clumps or in a large area. It is easiest to find in Immokalee, but it can be found in Brighton and around Okeechobee. The rainy season is the best time to find it, but the thin grass grows in individual strands among other foliage. About as thin as spaghetti, it is easy to overlook.

As land gets cleared for farming, sweetgrass has become harder to find. It’s wild and cannot be cultivated; after a fire it grows back but once the land is cleared, the grass is gone for good.

“When I learned to make baskets, they told me I need to learn to find my own grass,” said Beletso, who was taught when she was 22 years old. “You get one at a time. It can take all day.”

Ethel Frank and Margaret Cypress taught her the craft. Later, Harriet Billie showed her how to make the handles. All three women have passed away, but their legacy continues in Beletso’s hands.

“I was always interested in baskets,” Beletso said. “I had a hard time learning because I’m left-handed and they were right-handed. I had to figure out how to do it.”

Lorraine Posada is right-handed, but she learned how to make the baskets from her left-handed mother.

“I learned to do it backwards,” said Posada, who has been making baskets since she was 18. “I can’t do it right-handed. Usually the dominant hand stitches and the other hand shapes the grass.”

The Posada girls both create their own crafts. Lauren, 14, prefers beadwork and Lindsey, 11, enjoys making baskets. The entire family entered items in the Seminole Tribal Fair arts contest this year. Beletso and Posada each won first place in their age categories, 55 and up and 18 to 36, respectively.

“It’s hard to put it down,” Posada said. “Starting a basket is the hardest part, but once you do, you don’t want to put it down.”

To get ready for Tribal Fair, both women spent hours every day for a few weeks completing their large baskets. Beletso usually works on a basket while watching TV or just sitting down.

“If I’m not working on a basket, I’m biting my nails,” she said.

Whenever she travels, the first thing Beletso packs is her baskets, bundles of grass and thread. Both women said that when they begin a basket, they have an idea of what colors they will use and a basic shape they would like to make.

“You never know exactly what it will look like and you can’t make two alike,” Beletso said. “I made two offering plates for my church and they are almost the same size.”

The tradition of sweetgrass basketry began in the 1930s as items to sell to tourists. Over time, the baskets were widely recognized as a legitimate Tribal art form along with patchwork and Seminole dolls. The grass is prepared by drying in the sun, then gathered into large bundles.

The basket maker takes some grass, makes it into coils and stitches them together with colorful embroidery thread as it is shaped into a basket. The bottoms of the baskets are made of palmetto fiber, which is also gathered in the wild.

Not many people continue the tradition; just a few women do it now, Beletso said.

“I’d be happy to teach people how to pull the grass,” she said. “But it will have to be in the rainy season. It’s too dry to find a lot now.”

“I like taking raw materials and turning it into something you created,” she said. “It’s beautiful and you can say you did that.”

Beletso can always tell her baskets from other people’s work.

“I like to make smaller rows because I don’t know where the next grass will come from,” she said.