Welcome to 2022! What better way to ring in the new year than the 7th installment of our 8 part series highlighting Seminole Tourism, past and present? In this series, we have been showcasing how tourism has been a key part of the Seminole entrepreneurial spirit for over a century using articles from The Seminole Tribune. Today’s article features a business profile of Big Cypress Landing from 2013. 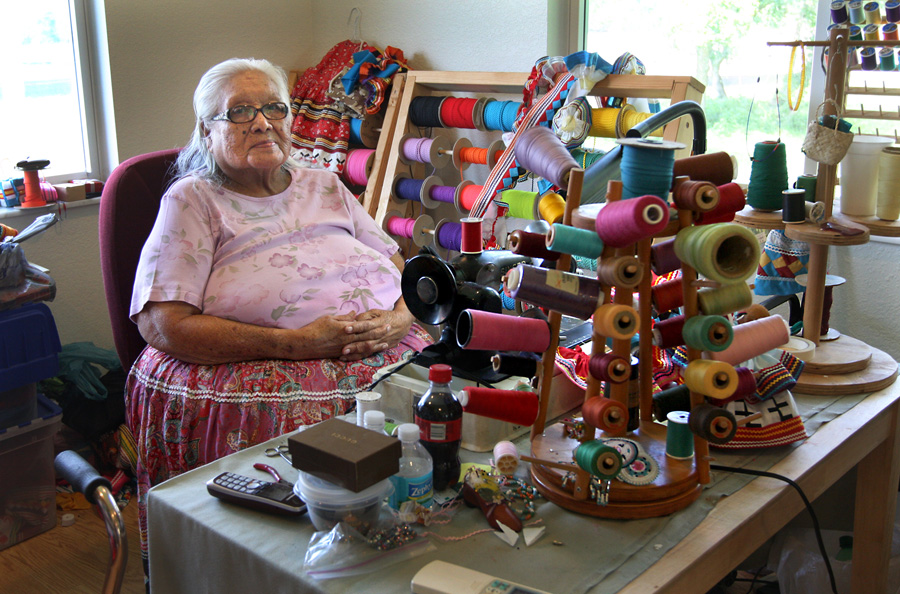 BIG CYPRESS — Sadie Tommie Cypress, 82, could only imagine 40 years ago that someday her tiny chickee store packed with snacks, sodas and Seminole arts and crafts on the edge of a swamp would grow to be a landmark on the Big Cypress Reservation.

“My mother used to dream of having a big, beautiful place. Now she is living her dream,” said Janice Billie, Sadie’s daughter and the manager of Big Cypress Landing grocery store, art shop and restaurant that bustles right in the center of town.

When Sadie Tommie Cypress, of the Bird Clan, was just a girl, she often traveled from her home in Hollywood to Big Cypress on weekends to visit an ailing uncle, Brownie Tommie.

“There was nothing out here,” she said from the crafts room in her home where sunlight dappled through the window onto reams of fabric, large spools of thread and seemingly endless yards of rick rack trim. “We had to bring everything we needed every time we came.”

In her childhood days, her parents, Sam and Mildred Tommie, used to sell their handmade goods along the New River in Fort Lauderdale, near the historic Stranahan House or in West Palm Beach in a city park with a name she has long forgotten.

Cypress’ father had the business sense in the family. Her mother and Aunt Annie Tommie handled the arts and crafts.

In the early ’70s, she leased a tiny spot under a little souvenir chickee in Big Cypress and began selling drinks, snacks and a few cooked items. That lasted two years before the roof began to leak and Cypress moved to a new chickee – still tiny – but with a concrete floor.

“There was no way I could afford a real concrete building so I used a 40-foot-by-60-foot chickee and started selling groceries, hamburgers…until about 1980 when a hurricane blew the chickee away. [Hurricane] Dennis closed me down,” Cypress said.

“When you have a business you have to keep it going or lose it. I thought about closing a few times but I stayed open for the community. People needed a place to pick up things they always needed,” Cypress said.

She applied for a plot where the full size, brick and mortar store stands now and had another chickee erected. The place was divided into sections: groceries, hot food service and Seminole souvenirs gleaned from friends and family.

At first, Cypress said, she gave away more than she sold. Customers would need a loaf of bread or a dozen eggs every once in a while on credit – which Cypress often forgave.

“The more you give, the more you get in return. Whenever I ask something of God, I ask if it is wrong or right. He knows me better than I know myself. I know if it is good for me, he will let it happen,” she said.

In 2008, she built her dream. She named the pretty green-roofed business Big Cypress Landing as a nod to the reservation’s original Brown’s Landing Trading Post that existed during the turn of the 20th century a little more than a mile southwest.

There, Cypress established a reputation for the best burgers around – literally. Homemade and cooked to order, the juicy burger is served on a toasted bun with a hearty side of french fries. She told of two girlfriends, one from Clewiston and one from West Palm Beach, who meet twice every month for Sadie’s “famous” burgers.

“I asked them, ‘Why, when you can go to Burger King or McDonald’s?’ They say there is no burger better. I never thought people would travel 40 miles for my burger,” Billie said.

Restaurant seating is packed daily with lunch and dinner crowds for daily specials that include tropical chicken chop salad with rice and beans; spaghetti and meat sauce; shredded pork sandwiches and Seminole traditional favorites such as Indian burgers and Indian tacos.

The grocery section shelves are packed with snacks and convenience items from canned vegetables to toothpaste and fresh bananas. Authentic Tribal arts, crafts, jewelry and clothing make up another section where tourists and Tribal members can spend a few bucks or several hundred.

All the clothing is made by Billie’s own hands and the hands of other Tribal women. She also fashions a lot of the beaded jewelry, sweetgrass baskets and Seminole dolls. Billie’s work consistently places in the annual Tribal Fair’s sweetgrass basket and clothing competitions.

Though her daughters Janice and Carolyn Billie now run the daily operations at the store, restaurant and arts corner most of the time, Sadie Billie checks in several times a week and is just a holler away in her crafts room just across the driveway.

The mother of four, grandmother of eight and great-grandmother to “millions and millions of kids” has no plans to retire – ever.

“I have too much sewing to do,” Sadie Billie said.