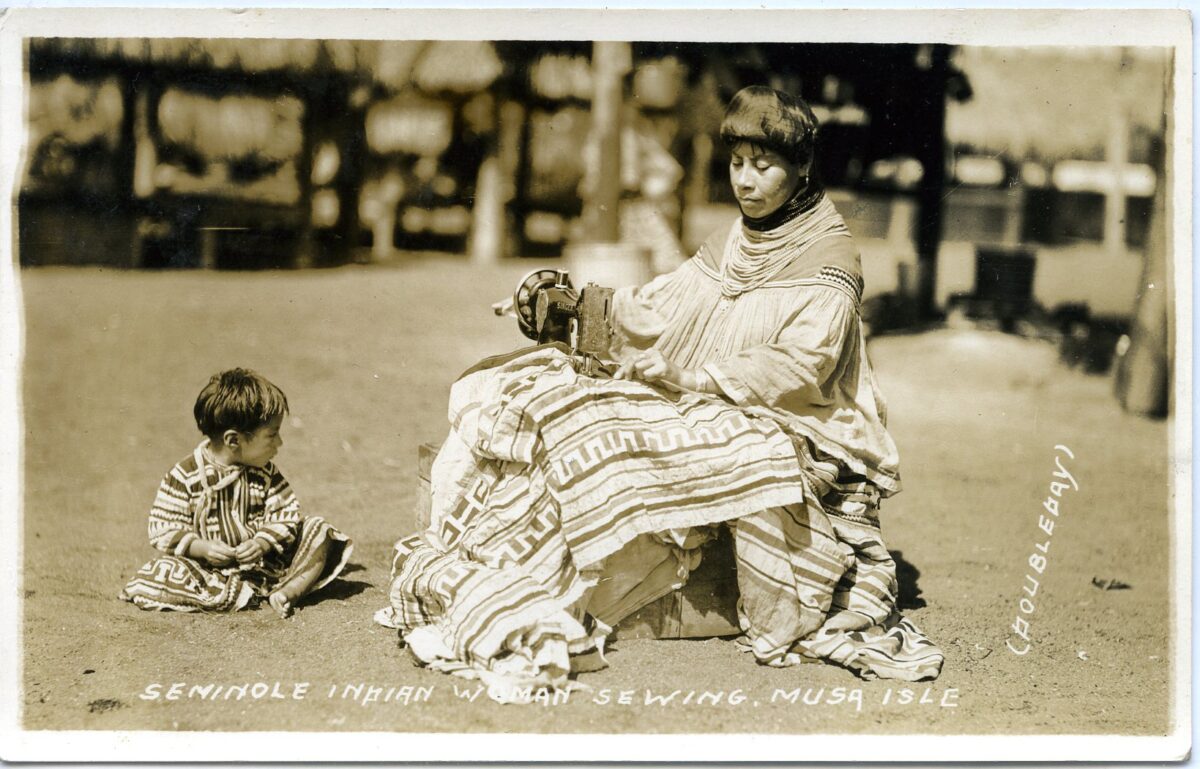 In the early 20th century, Seminoles began to sell crafts like dolls, sweetgrass baskets, and patchwork at tourist camps. As tourist camps began to rise, so did these crafts as souvenirs. In the last few months, we have talked about many iconic Seminole crafts on the blog. You can read more about sweetgrass baskets, modern sweetgrass basket makers, and Seminole dolls in previous blog posts. But, we haven’t taken a close look at patchwork yet! With the introduction of the sewing machine in the late 1800s, sewing became much easier. Sewing machines revolutionized the lives of Seminole women. This led to the eventual development of Seminole patchwork. An iconic cultural staple, Seminole patchwork is instantly recognizable. This week, we will look more closely at Seminole patchwork, and how it developed and changed over time.

The invention of the sewing machine had a massive impact on the development of patchwork in Seminole fashion. Sewing machines, like the ones made by Singer, became popular in the late 1800s. By 1890, they became mainstream items in family homes. Singer was the first company to offer installment sales of their machines. Individuals or families who could not afford the full purchase price could pay in installments, and still take their new machine home. Naturally, this gave lower income families much greater access to the machines, and they were soon popular. In 1891, Singer became one of the first companies to develop a radio jingle for advertising. The jingle claims “The sun never sets on a Singer sewing machine at work!” Even today, it would not be surprising if you had a Singer in your home!

But, what did this mean for patchwork? In Florida, the late 1800s signaled many shifts for the Seminole people. Seminoles lived in isolation in the Everglades during the Seminole War period for safety. They would trade at trading posts for items they could not make themselves. But, with the end of the trading post era, and the draining of the Everglades through a series of canal projects, that life of isolation would come to an end. Seminoles adapted as resources became scare in the Everglades. Soon, trading posts closed. Tourist camps opened to fill the economic void. Patchwork emerged around the 1910s. It became integrated in Seminole fashion and style. Seminole dolls would wear patchwork clothing. Along with hairstyles, painted features, patchwork, and beads, the dolls mimicked traditional Seminole styles and clothing. Patchwork and other crafts would soon become synonymous with Seminole tourism. 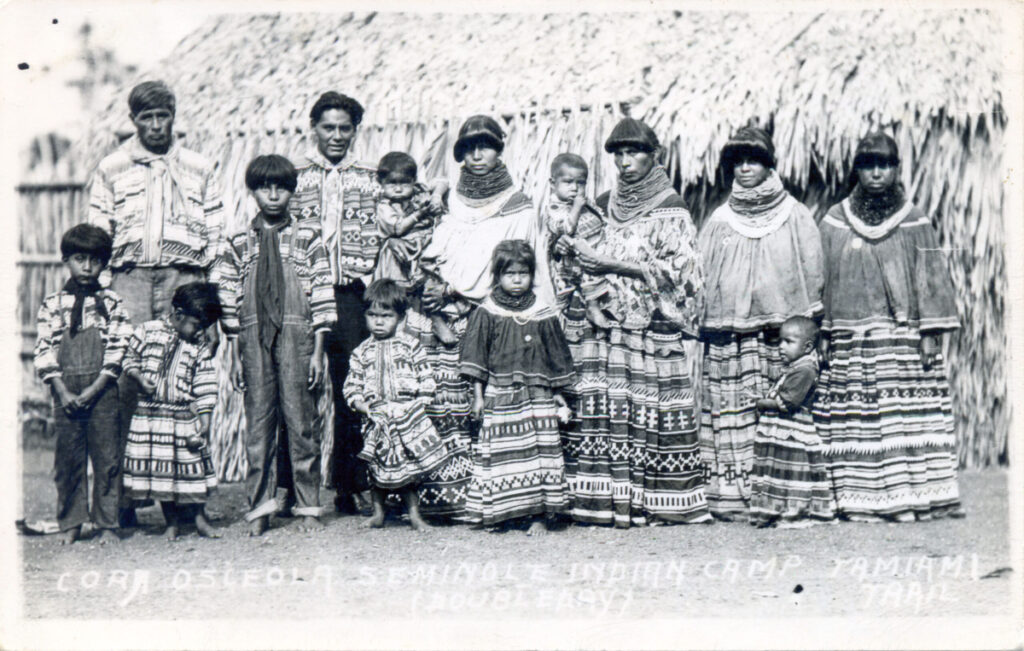 Initially, patchwork was simple and only two colors. Artists make geometric patterns by cutting, rotating, flipping, and mirroring long bands of sewn fabric strips. Then, they sew these patterned strips into larger pieces of clothing. Over time, it evolved into the intricate designs we see in today’s patchwork. Some patchwork makers create designs to represent stories or legends. Others may represent a powerful element, or a personal design for the maker themselves. Although we do not know exactly when it developed, patchwork was first documented in photographs around World War I (1914-1918). As discussed above, seamstresses began using sewing machines in the home. But, calico fabric and appliqué ribbon also became scare during World War II. Makers used these items for traditional clothing prior to patchwork. The ink needed was a German export, and hard to come by.

So, Seminole women began to make their own designs. With machines, sewing these detailed patterns was easier than ever. Skilled artisans could be more expressive, and make more complicated designs. Fashions shifted to feature patchwork more heavily, while appliqued fabrics fell out of style. Patchwork is different from appliqué fabric. You can flip the fabric over and still observe the design. The design is within the structure of the garment, instead of merely applied. In the featured photo this week, a mother sits with her son at Musa Isle. Musa Isle was a tourist camp in Miami in the early 20th century. You can read more about Musa Isle in a previous blog post. Both mother and son wear patchwork. She sews patchwork with a hand crank sewing machine.

How is patchwork made?

The making of patchwork is deceptively simple. Although it takes a lot of skill, artistry, and time to create, at its heart patchwork is scraps of fabric sewn together. The artisan sews long strips of cloth together in a long band. They then cut the band into smaller strips, either cut straight (up and down) or at an angle. They then flip and rotate these smaller pieces to create the desired pattern, and resew. More complex designs involve larger strips cut down into smaller pieces, more colors of fabric, and multiple bands. This allows the maker to have more combinations when rearranging the fabric. In the beginning, artists adopted simpler two-tone designs. Eventually, they became more complicated, and by the 1940s more colors were introduced. Seminole patchwork traditions are passed down within families. 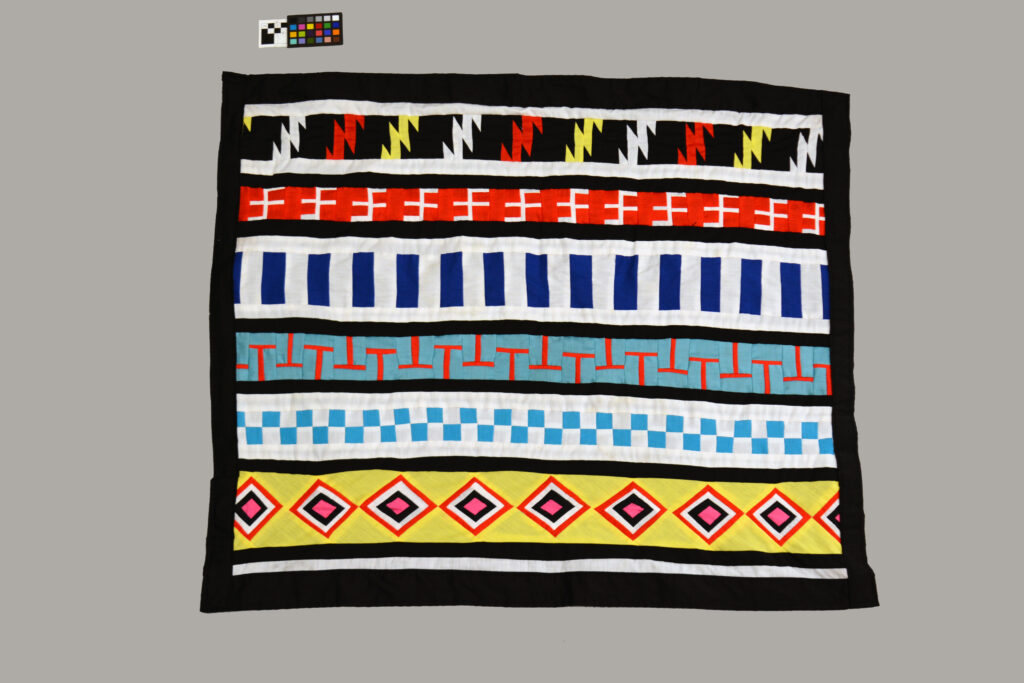 As dolls emerged in the tourism scene, so did tiny patchwork doll clothes. In a previous blog post, we looked a bit at the history of Seminole dolls. The most popular, and long-lasting, type of Seminole doll is made of palmetto fiber and cloth. These dolls would mirror Seminole fashion and styles. Hair, stylized features, beads, and patchwork bigshirts, skirts, and capes on dolls are common. As time went on, patchwork changed and more complicated designs were used. Doll clothes were made from scraps left behind when making clothes. Dolls and patchwork are special because they reflect facets of Seminole culture, identity, and history. Patchwork clothing on dolls can show changes in Seminole fashion over time, through patterns, colors, and materials used. From calico and applique to complex, multi-tiered and colored patterns, the shifts and changes in Seminole style are directly reflected in Seminole patchwork on dolls.

In the photograph below, an unidentified Seminole woman poses next to a Singer sewing machine, patchwork, and doll. The doll features patchwork on the clothing, and she wears patchwork and a cape. The image dates to the mid 20th century, judging by clothing and hairstyle. If you would like to see more Seminole dolls or patchwork, many pieces from the Ah-Tah-Thi-Ki Museum are available through the Online Collections. 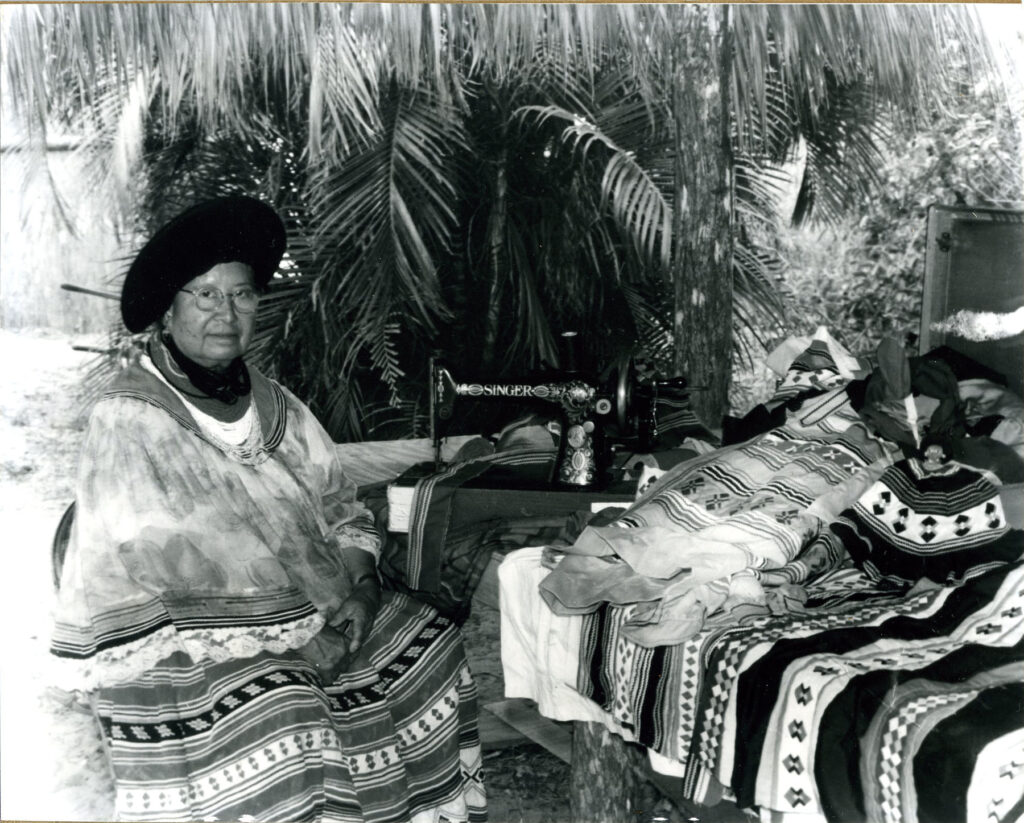 It’s Not a Costume

It’s Not a Costume: Modern Seminole Patchwork was an exhibit hosted by the Ah-Tah-Thi-Ki Museum from December 2014-November 2015 (now online). Seminole artist Jessica Osceola co-curated it with former Curator of Exhibits Rebecca Fell. The exhibit details examples of modern Seminole patchwork. The curators intentionally chose to feature pieces that are everyday wear. Unlike high fashion exhibits, It’s Not a Costume showed patchwork as it really is. People wear patchwork dresses, skirts, shirts, and jackets every day. The exhibit makes this plain, stating “We wear our patchwork to the office, parties, graduations, weddings, and when working out in the field.” It’s not a costume – these patchwork pieces are functional, everyday clothes that reflect Seminole identity, culture, and pride.

Throughout the exhibit, you will see a number of pieces and patchwork patterns. The exhibit looks at types of patchwork and construction for women’s shirts, children’s clothes, skirts, and more. Shifts in fashion with the times are a particularly interesting feature discussed, so it is worth taking a moment to explore this topic. For example, patchwork poodle skirts, supported by crinoline, were seen in the 1950s and 60s. These shorter skirts show a meld between mainstream American culture and Seminole culture, and the give and take of fashion over time. From grandmother to mother to daughter, the skills and knowledge to make patchwork survive even as fashion and tastes shift. As time moves on, patchwork is still an important part of Seminole life, identity, and cultural expression.

Seminole patchwork patterns are unfortunately not immune to appropriation and theft. In a previous blog post, we looked at cultural appropriation, and the harm that can do to cultural identity. The fashion industry has a long history of ripping off Native designs, imagery, and fashions. Seminole patchwork has not escaped this theft. The exhibit It’s Not a Costume explores design appropriation, and the harm it does. Design theft in the fashion industry is “hurting tribal arts, artists, and more importantly the identity of the tribal people…. For the Seminoles, the patchwork design is diluted and becomes less meaningful when others wear or create it without an understanding of its history.” Not only is it disrespectful of that history, but it also undermines and profits off the labor and culture of another person.

Jessica Osceola calls out appropriation and exploitation of Seminole patchwork designs. We discussed Osceola above as one of the co-creators of the exhibit. In a 2017 episode of NPR’s Code Switch, Osceola underlined her commitment to discussing this appropriation, stating “Patchwork has become a really recognizable art form … lately there’s been a lot of exploitation of it. Other people making these very specific designs… and constructing it — and I wanted to be a part of the movement showing people that it is part of our identity… that we remain strong, that and it’s a thing that’s happening now.” But, does this mean you can’t appreciate patchwork? Definitely not! But, it is your responsibility to think critically and draw that line. Learn about patchwork, Seminole history, and the patterns. Not all of them may be appropriate for you to purchase or wear. Make sure to buy authentic works directly from the original artist.

From hand-crank sewing machines to modern patchwork seen today, patchwork has a rich history behind the art. A common thread we follow on this blog is Seminole resilience and adaptability in the face of a changing world. That thread is very apparent in the development of patchwork. Made from necessity, patchwork has become a celebrated and unique representation of Seminole cultural identity and survival. 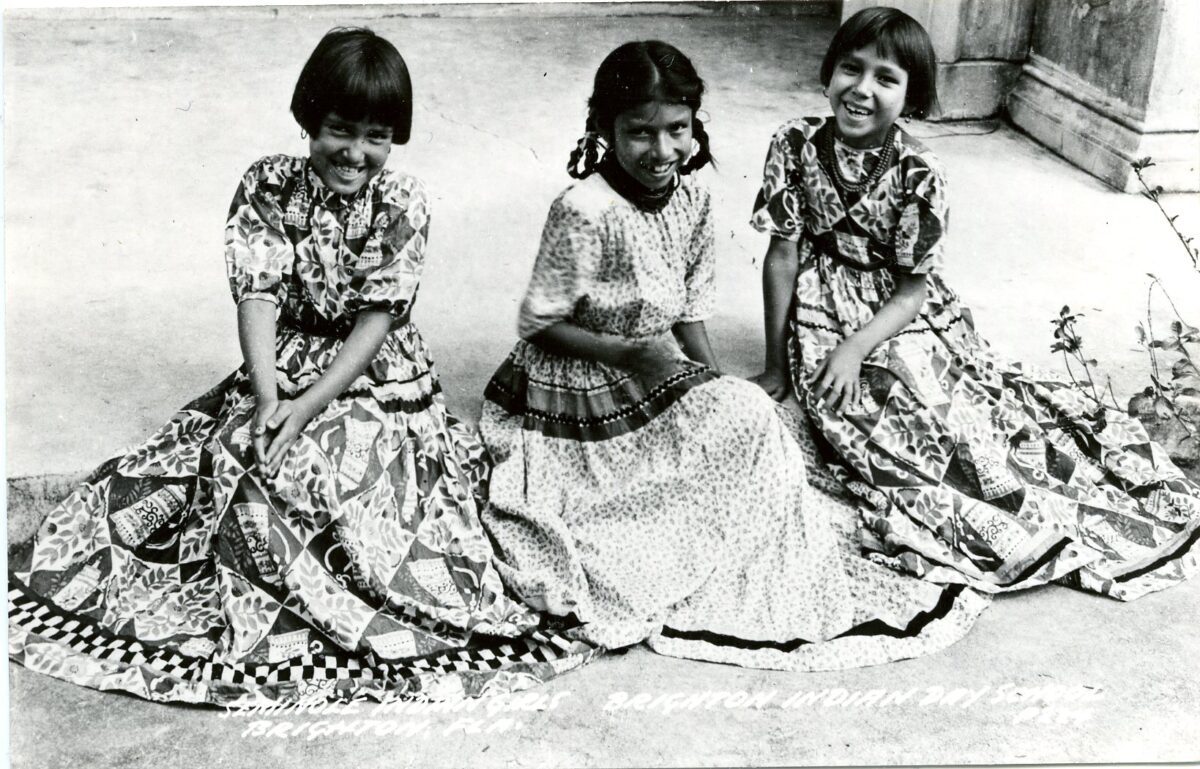