Biodiversity in the Florida Everglades 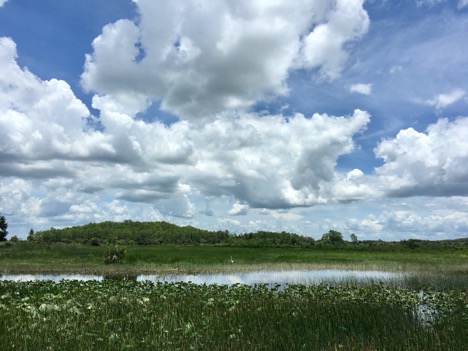 View from behind Billie Swamp Safari, Photo by Deanna Butler

Imagine skipping along on an airboat ride, paddling through a mangrove forest, or tromping through the swamp. Enjoy warm humid air on your face as you spy an alligator floating lazily in the water, or a soft pink roseate spoonbill flying by a canal. Biodiversity in the Florida Everglades is unmatched. Once you’ve experienced the Everglades, you know it’s a place unlike anywhere else in the world. Grab your binoculars, field guide, and bring lots of water for this trip through the Florida Everglades!

Starting just below Orlando at the Kissimmee River and reaching to the tip of the Florida Peninsula, the Everglades is a completely unique ecosystem rich with plant and animal life. Water flows from the Kissimmee River down south to Lake Okeechobee. The connection between the Kissimmee River and Lake Okeechobee is essential for the health and resilience of the wetland. This feeds the sheet flow and sawgrass marshes that inspired its iconic name the “River of Grass.” The Everglades is unique among wetlands in that the water comes mainly from rainfall, and not rivers. Water is the beating heart of this 1.5 million-acre wetland. It also provides a large percentage of drinking water for the state of Florida.

Biodiversity in the Florida Everglades

Seasonally, this geographical area can be split into two: the wet and dry seasons. When planning a trip to see all the sights, make sure to choose your dates carefully! Wet season typically runs from the middle of May until the end of November. This period is characterized by heavy rainfall, tropical storms, and sometimes hurricanes. Dry season, from December until April, has little to no rainfall and lower temperatures. Water levels can fluctuate significantly between the two seasons, and with that comes changes in the animal populations. While dry season is typically the best time to see wildlife, the wet season also has a lot to offer! You can learn more about how the seasons affect plant and animal life here in a previous blog post. 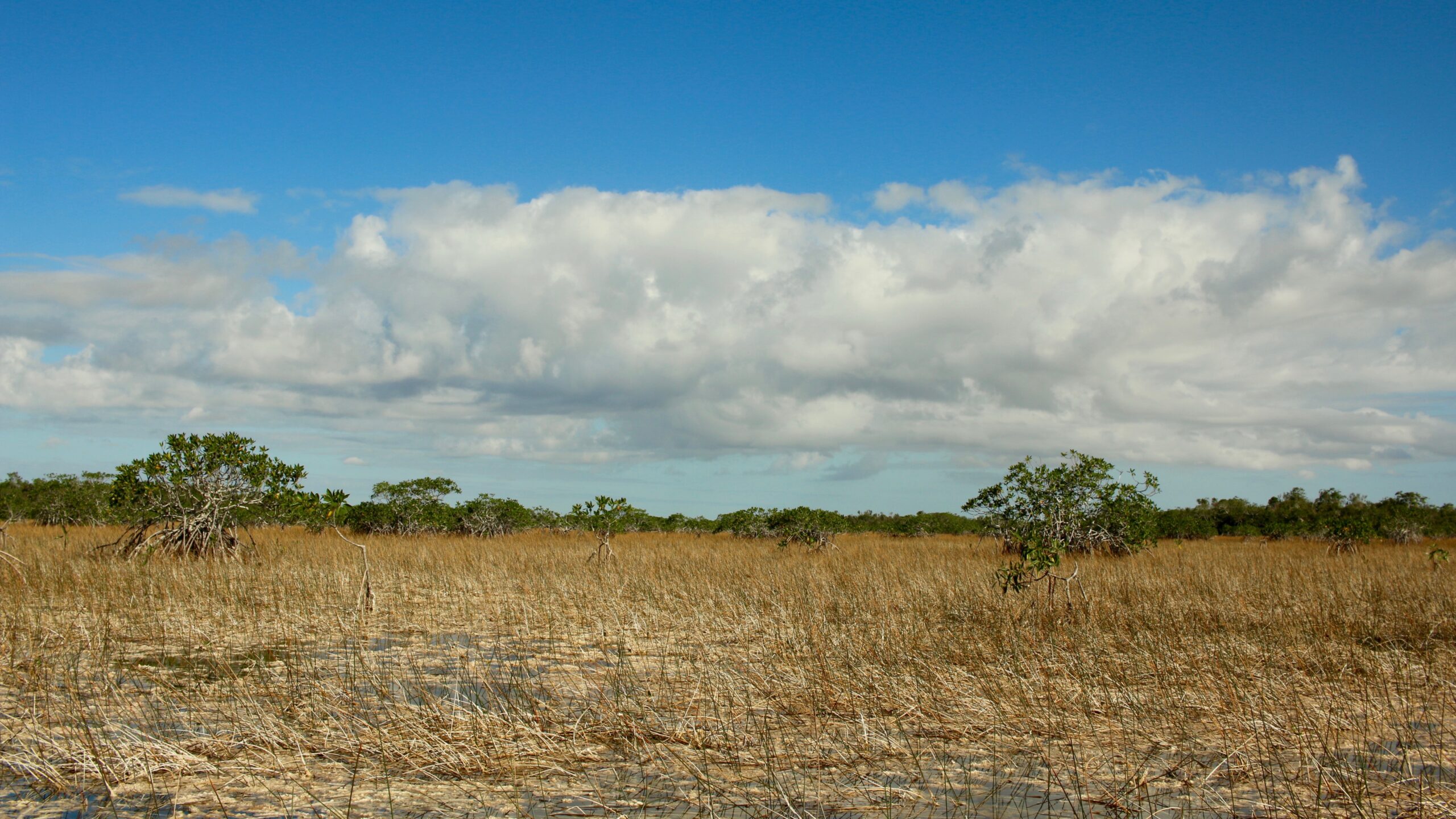 Hammocks are known as tree islands. These tree islands are slightly raised and provide safety for many animals with dense tree growth. The rich biodiversity in the Florida Everglades is not only limited to animal life, but plants as well. With a wide variety  of trees in them, these tree islands are diverse and dense. The pinelands are dry and go through cycles of natural forest fires to clear out needles and underbrush. Because of this, many of the plants are hardy and more fire resistant. These natural fire cycles keep the pineland and surrounding areas healthy. 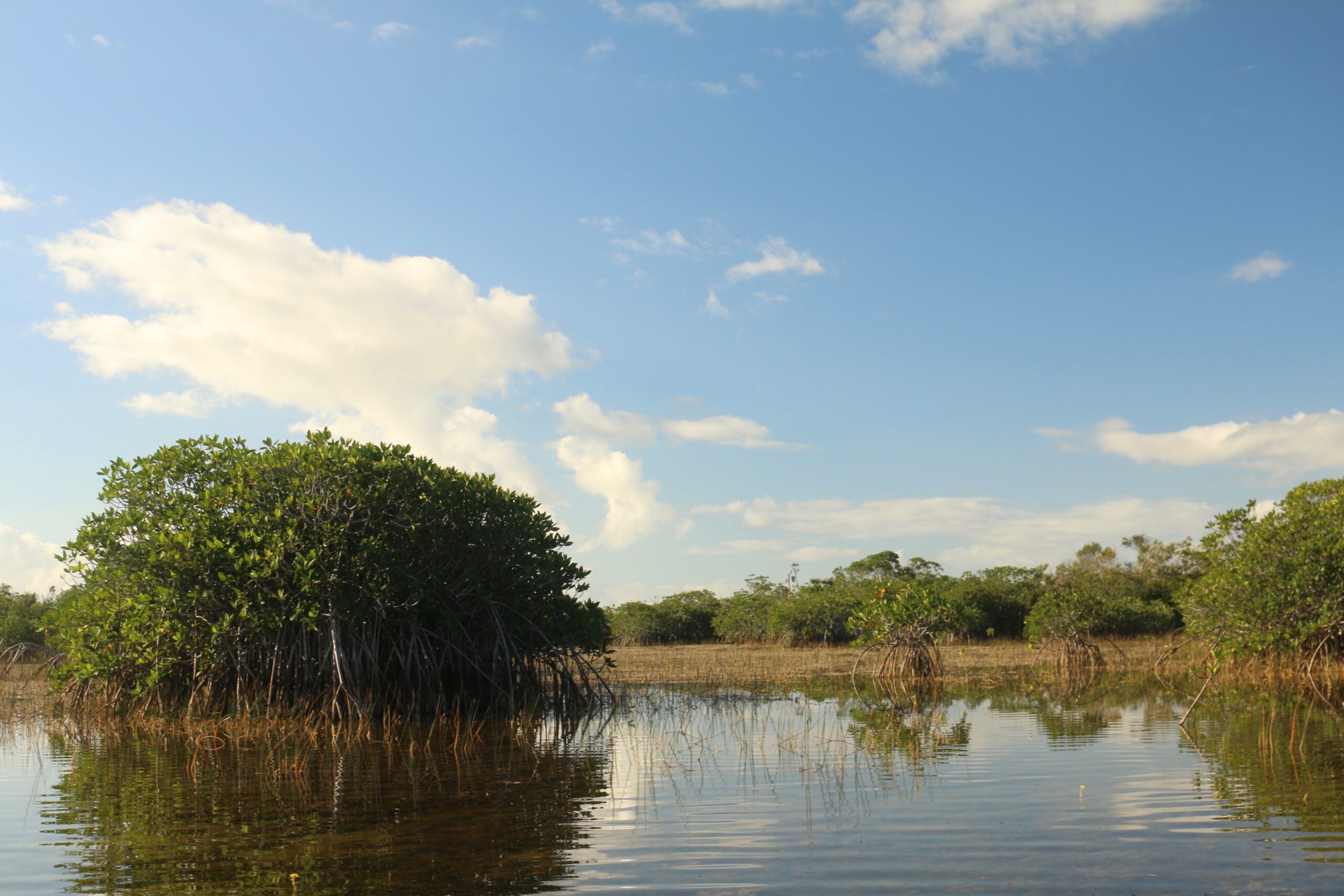 Along the coast, mangroves flourish in brackish water, where the salt and fresh water meet. These forests are very good at protecting the coast from storms. At the southern-most tip, Florida Bay holds vast beds of turtle grass, which feeds sea turtles and manatees.

These  different ecosystems support a range of plants and animals. Many can only be found in the Everglades. This means the Florida Everglades is a biodiversity hot spot. Over time, the Everglades has become increasingly threatened. Changes to the sheet flow, climate change, and population pressure all have put a strain on this delicate wetland. But many efforts are being made to protect this special wetland and its inhabitants. When visiting and planning your trip, remember to be respectful of this beautiful and fragile habitat. Next, follow along and learn more about some special animals that call the Everglades home. 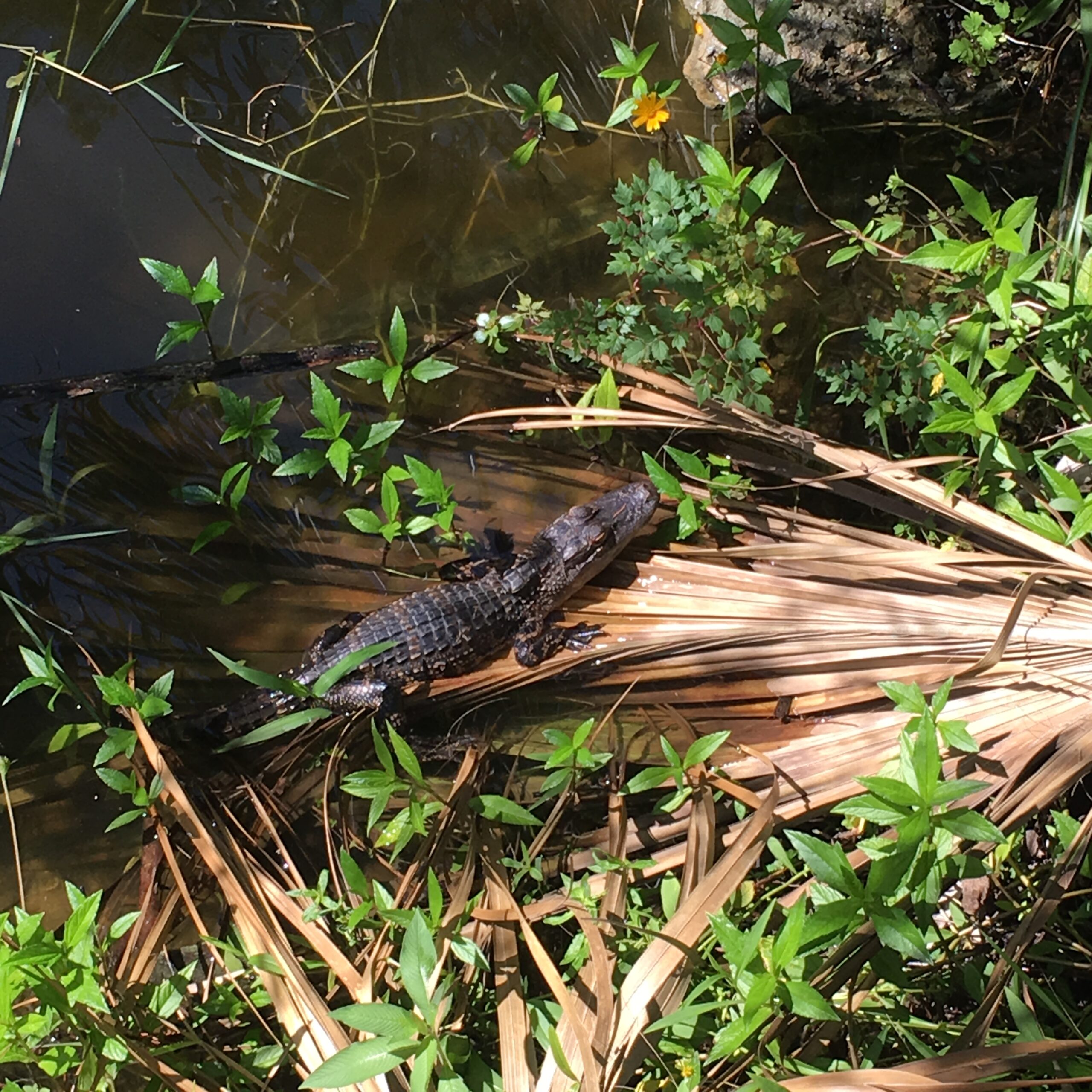 A keystone species in the Everglades, the American Alligator is found in the Southeastern United States. Almost synonymous with the state of Florida, the American alligator can grow up to 12 feet in length and top out at 1,000 lbs. Considered an ecosystem engineer, alligators dig ponds called “alligator holes.” These play an important role in providing habitats for other animals in both the wet and dry season. When it is dry, these holes hold water and provide homes for aquatic animals like fish.

Compared to their crocodile cousins, alligators are less tolerant of salt water. Sticking to deep freshwater sloughs and prairies, they often are seen floating lazily along or sunning themselves on the bank. Alligators have even been known to survive icy water by slowing their metabolisms down, making a hole in the ice, and sticking their snouts out over the water line.  Alligators have a distinctive bellow meant to attract mates and protect territory that can be heard around the swamp. Baby alligators are yellow banded and eventually lose their stripes as they mature. The baby alligator shown here was spotted from the Ah-Tah-Thi-Ki Museum boardwalk. This alligator may one day grow to be as big as Sally, the Ah-Tah-Thi-Ki Museum’s resident alligator. When visiting, try counting as many alligators as you can in your trip through the Everglades!

The Everglades is the only ecosystem on earth that alligators and crocodiles live together. Much more sensitive to temperature changes, American crocodiles live in a much smaller geographical range than their alligator cousins. South Florida is the only place they can be found in the United States. Crocodiles have a long, thin snout, compared to alligators who have a shorter rounded snout. Living mostly in the coastal areas, the American crocodile prefers brackish or salty water. They eat anything from fish, small mammals, birds, and snakes. Keep your eyes open for these elusive reptiles!

Aquatic herbivores, manatees are also called sea cows.  Manatees were once a food source for the Seminoles.  There are an estimated 6,000 manatees in Florida. They eat over 60 varieties of fresh and seawater plants, and are found in coastal areas. At the moment, manatees are very vulnerable to habitat loss. Manatees’ tails and flippers resemble large paddles that can help them “walk” along the bottom of shallow water. Docile and slow moving, they spend a large amount of their day sleeping. If you are lucky, you may see one (or a few!) on your Everglades adventure. But look closely! In the waterways and springs they can resemble slow moving rocks when submerged underwater.

Most likely, you will not see a Florida panther while visiting the Everglades. One of the most endangered animals on the planet, the Florida panther is the only cougar population in the eastern United States. Panthers are striking big cats, typically tan in color with a white underbelly and black-tipped ears and tail. Like other cats, they can hiss, growl, chirp, and purr dependent on the situation. Habitat loss has affected the Florida panther significantly, and there are less than 250 panthers left in the wild. In the 1970’s it was estimated that only about 20 wild panthers remained. Through conservation efforts, that number is beginning to rise. As predators, panthers are opportunistic hunters that go after both small and large prey. They can hunt anything from waterfowl to alligators. 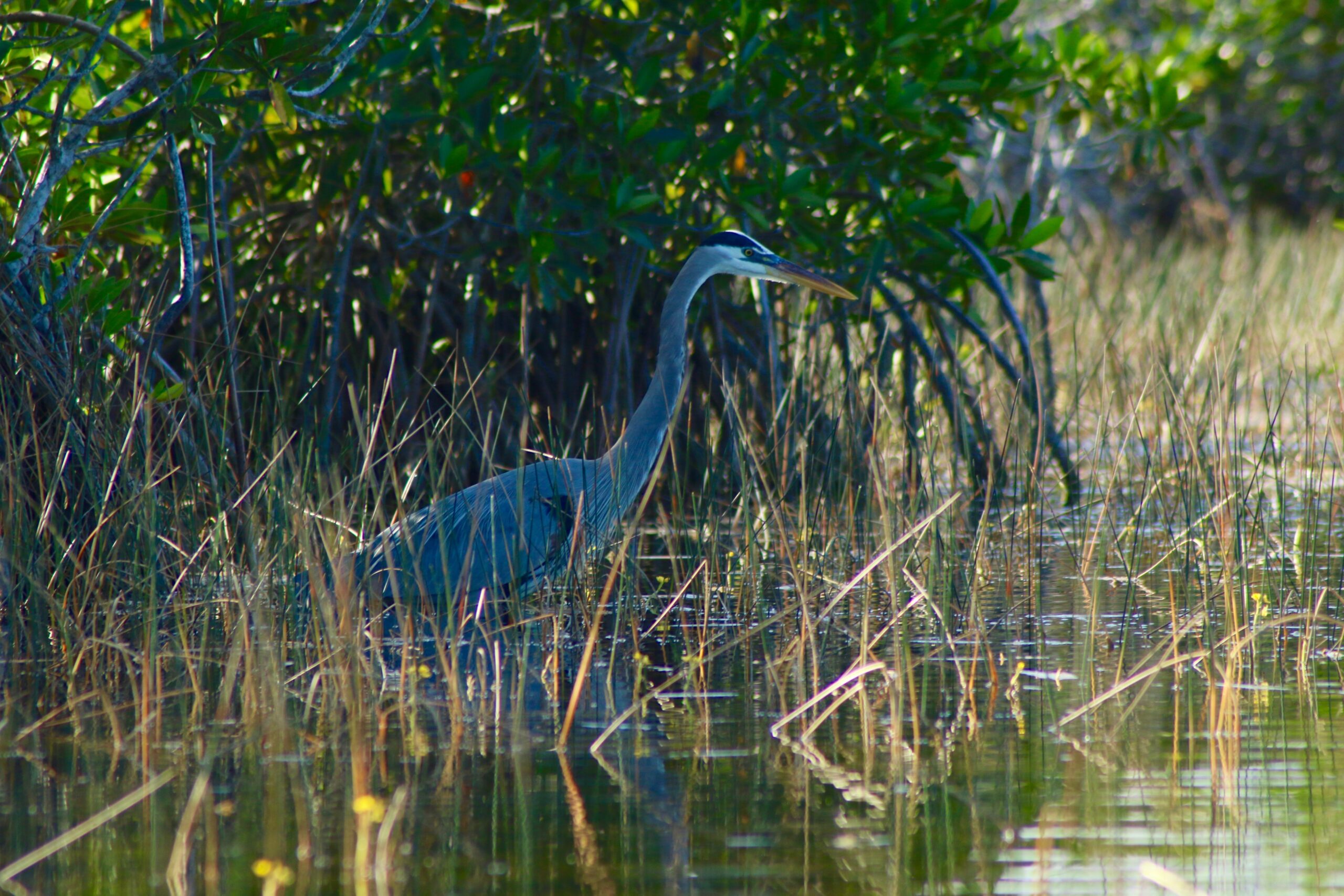 Famous for its birds, over 360 species  call the Everglades home. This includes many wading birds like the Great Blue Heron shown to the right. Sixteen different species of wading birds can be found. Birds are a great example of the biodiversity of the Everglades. You might see a variety of birds on your trip, including white ibis, wood storks, roseate spoonbills, herons, egrets, and osprey. There are a large variety of land, wading, and prey birds to be found in each unique ecosystem. Birds from all around the world migrate to the Everglades during the dry season to nest. It is one of the easiest places in the world to view a wide variety of bird species at one time. Learn more about birds of the Florida Everglades here in a previous blog post. Grab your field guide to identify all the feathered friends you can spot!

So, whether you’re interested in canoeing, fishing, swamp walks, bird watching, or camping there is something for everyone in the Everglades.  See the biodiversity of the Florida Everglades yourself! A one day trip or an entire week, the Everglades is sure to amaze with its diverse plant and animal life. Immerse yourself in the wild beauty of the Everglades today!

If you would like to see the beauty of the natural Everglades for yourself, there is no better starting point than staying at the Big Cypress RV Resort. “Stay your way” in either RV spots or air-conditioned cabins and enjoy a wide range of amenities. Located on the Big Cypress Reservation, it is the perfect base for your Everglades adventure.

Further Reading on Seminoles and the Everglades:

Seminoles and the Land

The Everglades: An Enduring Battleground