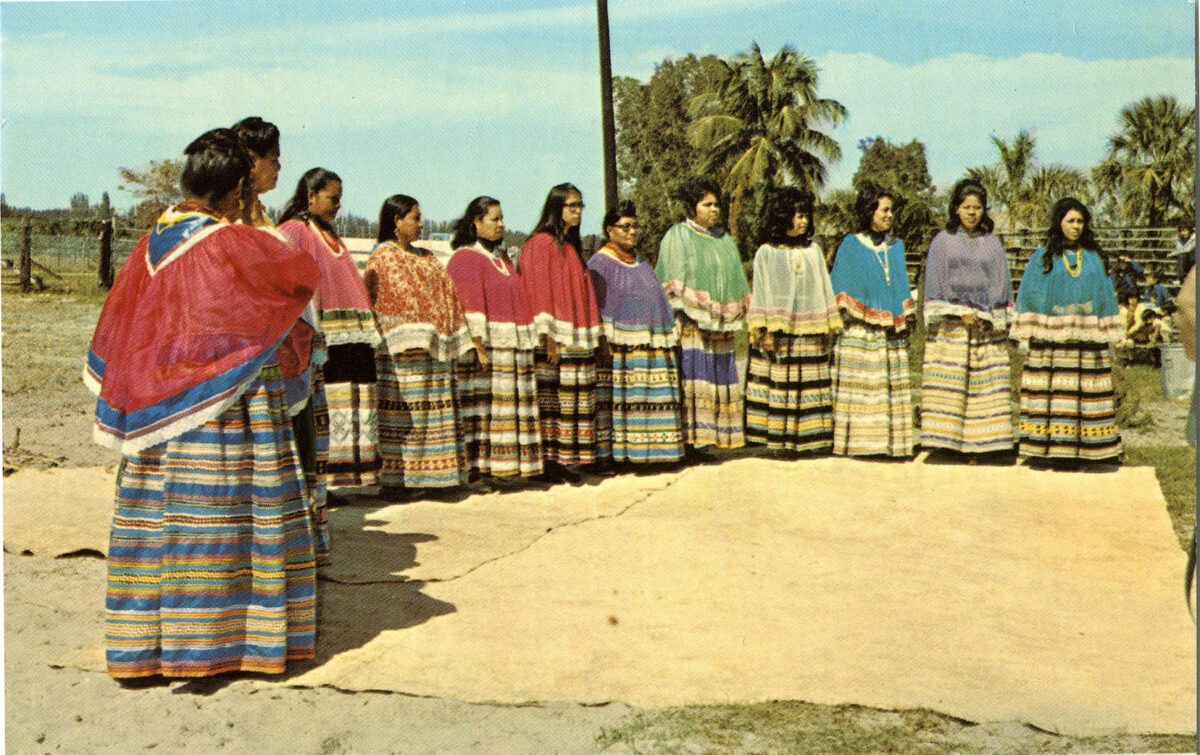 It is Festival Season! As we transition further into 2023, new exhibits and returning large-scale events offer jam packed family-friendly opportunities in the next few months. February is a particularly important month, with two large Seminole events on the calendar. Seminole Tribal Fair and Brighton Field Day are two must-see events. This week, join us to learn about Seminole Tribal Fair & Pow Wow, held February 10-12th at the Seminole Hard Rock Hotel & Casino in Hollywood, FL. Check back in a few weeks to learn all about Brighton Field Day!

In our featured photo this week, you can see a group of women competing in the “Women’s Traditional Dress Contest” at the 1973 Tribal Fair. Held at Seminole Okalee Indian Village, this photo is a Real Photo Postcard. In clothing contests, judges score based on the style, designs, and quality of their handmade clothing and patchwork. Adult and youth clothing contests are still a large part of Tribal Fair today. This year, there are six adult clothing contest categories: Style, Traditional, Jackets (Men only), Skirts (Women only), Modern, and Contemporary. The youth contests encompass three categories: Old Style, Traditional, and Contemporary. Clothing and patchwork must be made by a Seminole or Miccosukee tribal member within the last six months.

The Seminole Tribe of Florida Tribal Fair & Pow Wow is one of the biggest events of the year. This year’s event comes after a hiatus due to the pandemic and commemorates the 50th anniversary. Originally held at the Seminole Okalee Indian Village in Hollywood, this event has grown larger along with the Seminole Tribe.

In a 1972 article about Tribal Fair, Judy Gopher, the then-manager of the Okalee Village Arts & Crafts Center, noted that she hoped the event would attract a few thousand attendants (Fort Lauderdale News, 2/9/1972). At the time, Tribal Fair was one of the Seminole Tribe’s major fundraisers, and tickets cost $3 for adults and $1.50 for children. Now, many thousands flock to Tribal Fair each year. Main highlights from the fair were a “full-scale rodeo and carnival,” clothing contests, stomp dances, animal and alligator shows, and crafts. 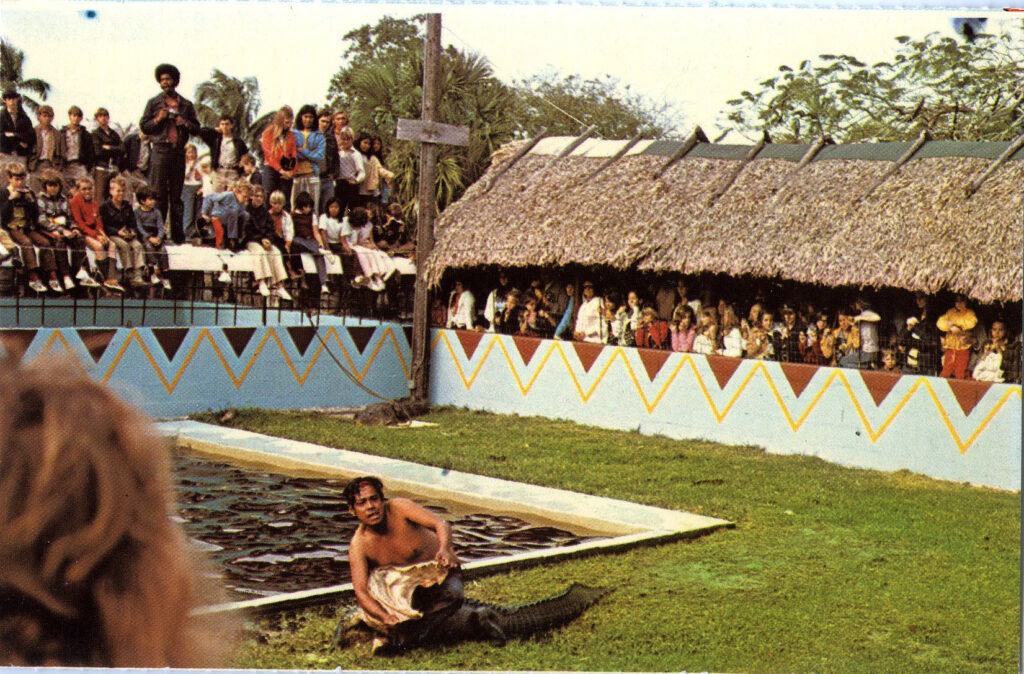 Above, you can see part of an alligator show at the 1973 Tribal Fair at Okalee Indian Village. This Real Photo postcard was part of the six-card pack that also included our featured photo. Alligator wrestling is an important and celebrated part of Seminole culture, and has drawn tourists and onlookers since the 1920s. Similarly, the rodeo component was another integral part of Tribal Fair. The 1972 Tribal Fair boasted a rodeo complete with “bare-back riding, calf roping, bull-dogging, barrel racing, and the calf scramble, in which children try to wrestle calves for cash prizes.”  Many facets of these earlier Tribal Fairs can still be seen in the upcoming event this February.

What is a Pow Wow?

So far, we have mostly focused on the ‘Tribal Fair’ part of the event. But, what is a Pow Wow? Pow Wows are “Native American gatherings in which American Indians sing, dance, reconnect with old friends and celebrate their rich ancestral histories”. Sometimes accompanied by a conference or meeting, Pow Wows are typically a way to celebrate heritage through sharing songs and dancing. Dancing and music are incredibly important and bring together many different Indigenous tribes and communities. While some Pow Wows are closed to the public, many like this year’s Tribal Fair & Pow Wow are open to the greater community. Drummers and dancers from Indigenous communities across the country travel to reconnect, socialize, and share their pride and heritage. 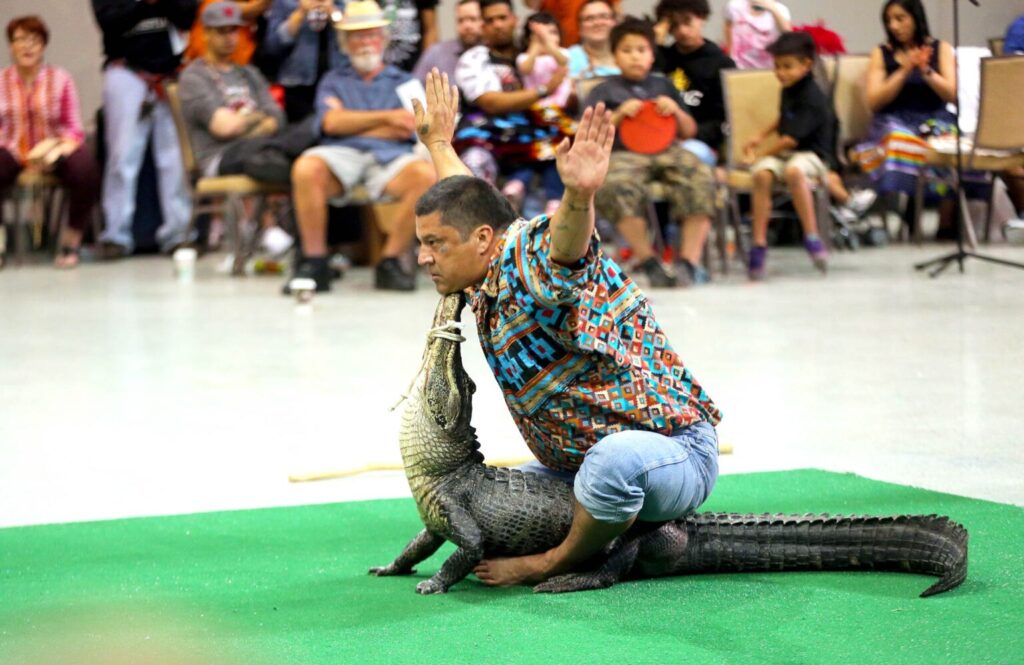 Quick Tips and Etiquette for Attending a Pow Wow

Pow Wows are a wonderful and whirlwind way to experience Indigenous traditions and cultures. Above all, be respectful, but have fun! Below, you can see seven youth stomp dancers performing in front of an audience at Tribal Fair 1990. Stephen D. Bowers donated this photo as part of a collection. It was displayed from 1990-2003 in the Governor’s Council on Indian Affairs in Tallahassee, FL. To learn more about specific dances you may see at this year’s Tribal Fair & Pow Wow, as well as a larger list of rules and etiquette to follow, a list has been compiled here. 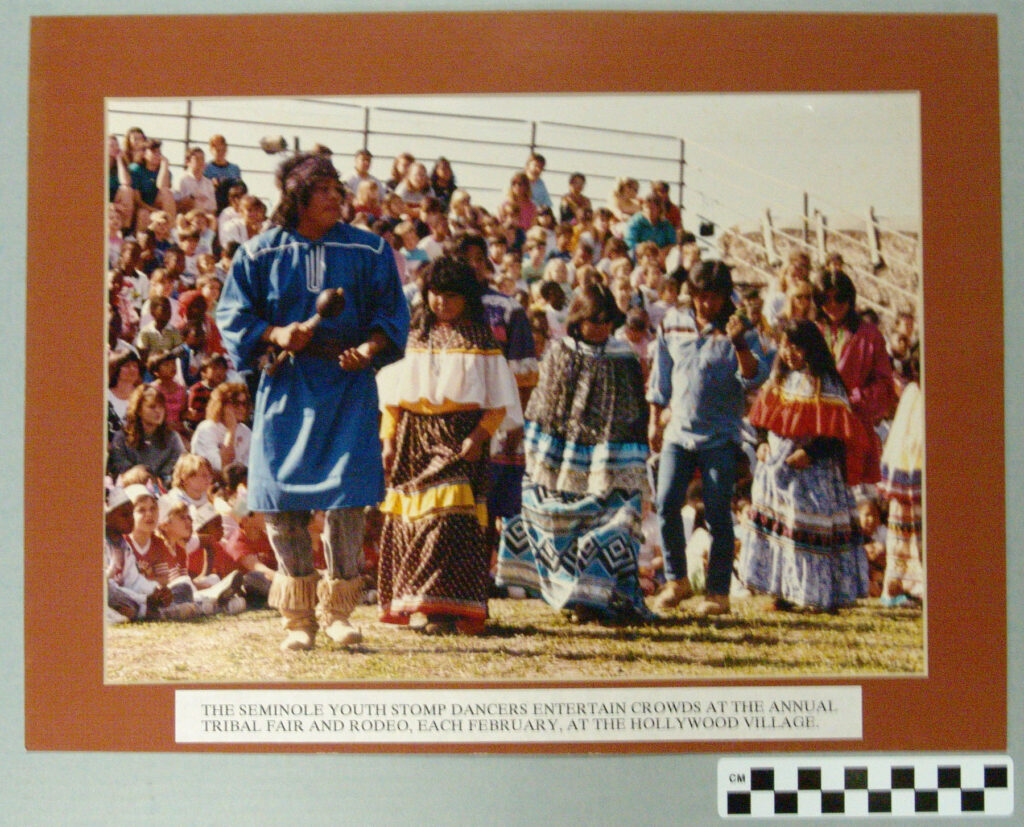 This year’s highly anticipated event is chock-full of exciting family-friendly offerings. After a few years’ hiatus for the safety of the community, Tribal Fair is back and bigger than ever. This celebration of native arts and culture features something for everyone. Known as “South Florida’s Best Kept Secret,” the Seminole Tribal Fair & Pow Wow is a FREE event, open to the public and held at the Seminole Hard Rock Hotel & Casino in Hollywood, FL.

In addition to alligator wrestling demonstrations, drumming and dancing competitions are available for the public to view. Arts, crafts, and native goods and food will be available for purchase.

Pow Wow events will only be held Friday, February 10th, and Saturday, February 11th. Primitive camping is available for competitors but is first come first serve.

Native Reel Cinema Fest takes place at 5pm on Friday with a screening of a “Retro Reel Rendezvous” movie with a photo-op to follow.  On Saturday, Native Reel will host a Q&A panel with directors Shaandiin Tome and Stevie Salas at 2pm, followed by the short-film showcase from 2pm-3pm.  At 5pm-7pm there will be a “Retro Reel Rendezvous” movie with photo-op to follow.

On Sunday, February 12th, a free concert will be available to fairgoers. The headliner, Sublime with Rome, goes on at 3pm, with openers starting at 1pm. Sublime with Rome is a collaboration between Eric Wilson, formerly of the ska punk band Sublime, and singer-guitarist Rome Ramirez. They primarily perform songs by Sublime. Check out Tribal Fair’s website and Instagram for the most updated information, as well as a music playlist and a schedule of events when it becomes available.

How do I get there?

The Seminole Hard Rock and Casino is conveniently located in the heart of Hollywood, FL. From Fort Lauderdale, merge onto I-595 W from I-95 S. Take Exit 8-9A-9B to merge onto US-441 S. In approximately 3 miles, the casino will be to your right. From Miami, you can take I-95 N and follow I-95 N/Florida’s Turnpike to FL-818/E Griffin Rd. Take Exit 53 from Florida’s Turnpike, and follow to US-441 S until your destination. From the West, take I-75 S across Alligator Alley. Take exit 8-9A-9B from I-595 E to merge onto US-441 S, and follow approximately 3 miles until your destination. Additionally, the Seminole Hard Rock & Casino has ample parking garages to accommodate large events.

The Seminole Tribal Fair & Pow Wow is an action packed, colorful, and vibrant event suitable for the whole family. From skilled dancers, drum performances, crafts for sale, alligator wrestling demonstrations, and fashion show, you would have to attend all three days to see it all! This year, for their 50th Anniversary, the event is coming back bigger and better than ever, so mark your calendars for the biggest event of the year. 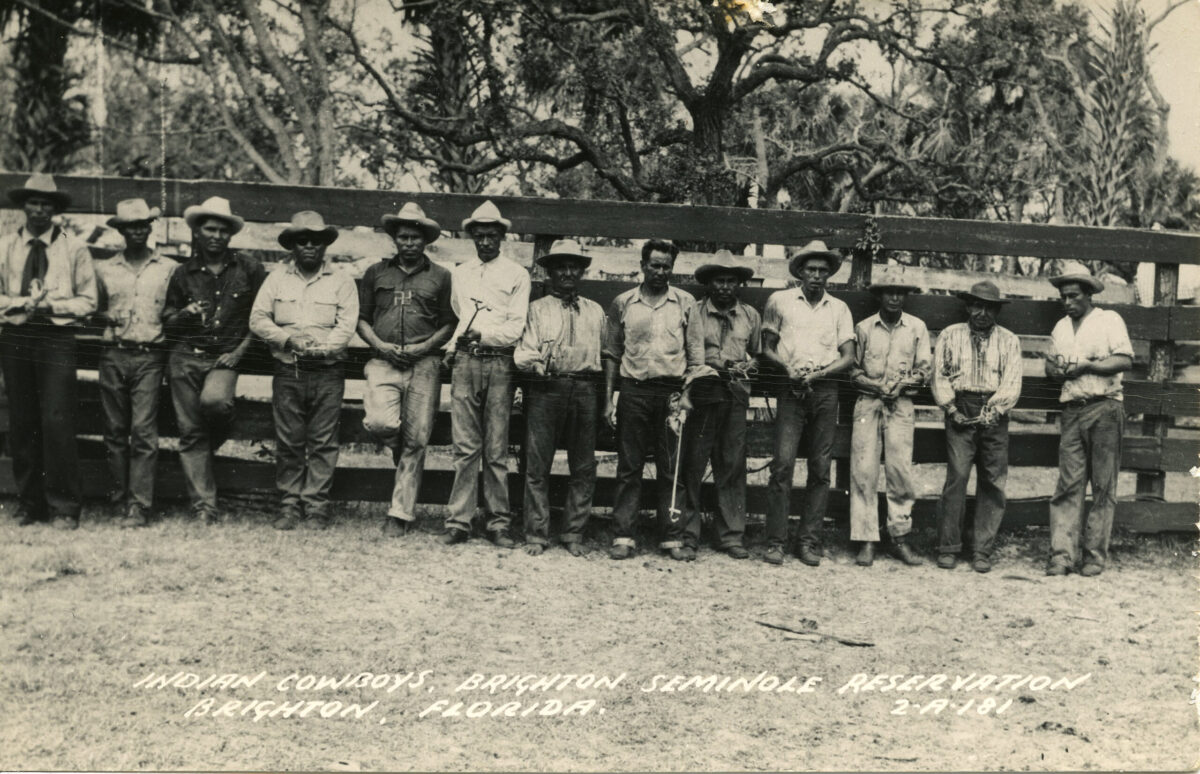 Federal Recognition in the 1950s