Hello! Welcome to the fifth installment in our 8 week series highlighting Seminole Tourism, past and present. In this series, we will be showcasing how tourism has been a key part of the Seminole entrepreneurial spirit for over a century using articles from The Seminole Tribune. Today’s featured article is about alligator wrestling. If you haven’t seen the Ah-Tah-Thi-Ki Museum’s exhibit on this topic yet, be sure to check it out!

There are usually two sides to every story. Sometimes stories become woven together so tightly that it is difficult to untangle them over the course of time. The Ah-Tah-Thi-Ki Museum’s next exhibit about alligator wrestling is one of those stories.

Non-Seminoles think in a linear time frame, a specific date, an event, and a progression of circumstances. Leafing through the books in the Museum’s archives, this format is obvious. Books written about the tourist camp decades ago suggest that Henry Coppinger Jr. is responsible for popularizing the sport and introducing alligator wrestling to the Seminoles. However, for Miccosukee men, hunting and handling alligators existed long before the introduction of tourist camps. Seminole ancestors hunted alligators as far back as the 1500s (depicted in the reproduction drawing of Florida’s Indians slaying a ferocious, crocodilian-like, reptile). Additionally, wood carved artifacts, found on Key Marco off the coast of Naples in the 1880s, serve as record to the long association between the early Indigenous Peoples of Florida and this reptile (whether appropriated for food or ceremonial practice). 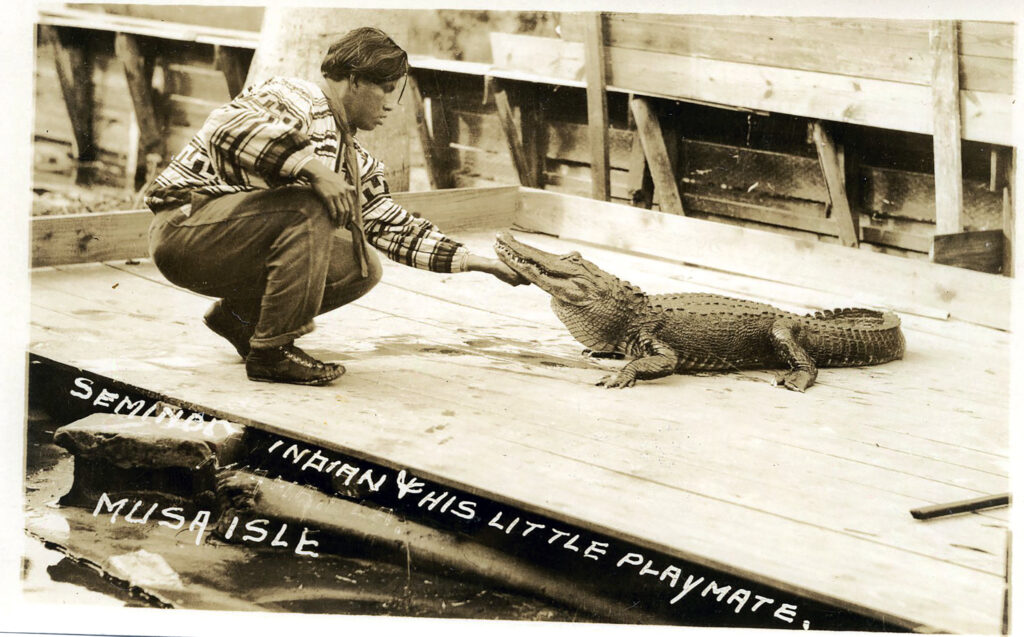 In several interviews from the Museum’s collection, Tribal members make a distinction between alligator wrestling and capturing. Jack Chalfant, a Tribal member and Tribal Historic Preservation Office employee (and sometime alligator handler) reinforces this idea. This places a slightly different twist on the Seminole history of alligator wrestling. Obscured are the popular, non-Seminole personalities who established Miami’s early tourist attractions (i.e. alligator farms, Seminole tourist camps) and where alligator wrestling was performed. Instead, Jack Chalfant’s story has an unknown passerby driving along a recently constructed Tamiami Trail, witnessing a Seminole man in a canoe, “capture, tie and drag” from the water, an alligator and afterward placing the tied alligator in a pen. (It is much easier to “catch” an already captured but live animal!) The passerby then threw money to the Seminole, commenting, “It makes for a great show.” Asked about Henry Coppinger Jr., Chalfant says Coppinger watched the Seminoles capturing the alligators- and a new money-making idea was born.

This version of the story is based on the simple need to survive and provide food for the family. But it is a fortuitous encounter that undoubtedly created a new economic outlet for the Seminoles at an uncertain time.There is some truth to the saying, “necessity is the mother of invention.” Maybe it is a matter of who gets there first and tags it as their own.

As the exhibit team gathers the information, we are set on a path where the Seminole community is key to unraveling the evolution of Seminole alligator wrestling. In the new exhibit, traditional, cultural, and historical components will be shared with the non-Seminole visitor to enhance understanding of the Seminole perspective. The most insightful information has not been found on the pages of a book but from Tribal members themselves. Alligator wrestling is immersed in the Seminole culture, and it is largely theirs and the Miccosukee’s own story.