Hello! Welcome to the third installment in our series highlighting Seminole Tourism, past and present. In this series, we will be showcasing how tourism has been a key part of the Seminole entrepreneurial spirit for over a century using articles from The Seminole Tribune. Today, we feature an article about the Tamiami Trail. Enjoy!

Blazing a trail through swamps and Everglades • The Seminole Tribune 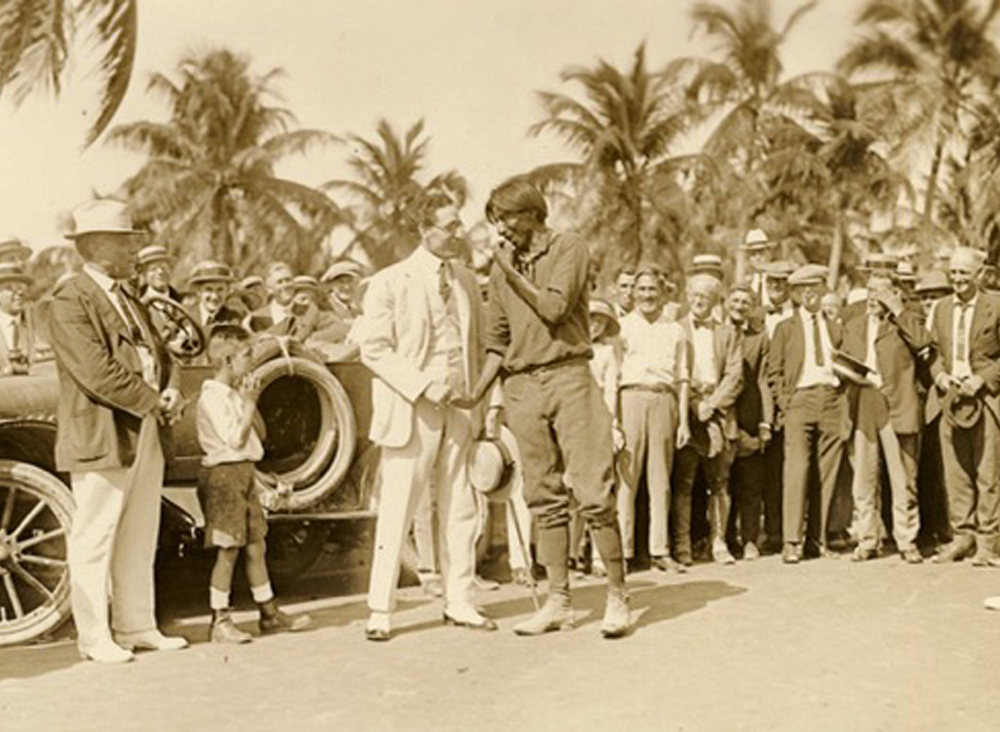 The Tamiami Trail snakes 264 miles across Florida from State Road 60 in Tampa, down the southwest coast of Florida through Naples, across the Big Cypress Swamp and Everglades to U.S. 1 in Miami, where it becomes Calle Ocho in Little Havana – and finally Brickell Avenue in downtown Miami.

This famous roadway owes its birth to a band of activists called the Tamiami Trail Blazers who gathered a motorcade in 1923 to cross miles of unimproved Everglades in Model T Fords, to gain federal attention and funding and to prove that such a feat was even possible.

The first known reference to conquering Florida’s wet wilderness occurred in 1892 when A. Church James Ingraham (later the president of Florida East Coast Railroad) led an expedition of hardy pioneers by boat and by foot. Bill Harney, a Seminole, guided the last 25 miles after the group had become turned around in the wrong direction.

By the 1920s, automobiles became more prevalent and northerners wanted to visit Florida, but the roads were few, far between and in bad shape. A drive from Naples to Miami would take weeks.

In 1895, Capt. J.F. Jaudon – one of Dade County’s first tax assessors – envisioned a highway that would straight-link the two coasts and open his land up for development. A decade later, Jaudon implemented his complex plan, which had various counties build and pay for sections with $8 million to spend and 13 years to complete.

Many criticized the plan, disheartened by the idea of their tax money paying for obvious special interests.

By 1919, financial reasons prevented Lee County from carrying out its part of the deal. Jaudon had already purchased 207,360 acres of outback land, mostly in Monroe County. He claimed his Chevalier Corporation would pay the bill if Dade and Lee counties agreed to re-route the Tamiami Trail through Monroe. The proposal was accepted and Chevalier began laying a new segment of road, looping out from the main road survey, through his properties in the middle of nowhere (known today as the Loop Road).

Around the same time, the Seminole and Miccosukee Tribes were undergoing a new diversity of cultural and economic activity. Miami had become the largest trading and tourist center for South Florida Indians and in 1922, Seminole craft shops and living villages were opened at Miami attractions Musa Isle and Coppinger’s Tropical Gardens.

The state, noting the burgeoning business growth in Miami, realized the slow-building road was critical to expanding South Florida’s economy. In an unprecedented move, the state Road Department offered to pay for half the east-west (Naples to Miami) portion of the trail if Dade County would pick up the rest. Again, taxpayers were unsatisfied with the decision, claiming it was not only impossible to build a road through thick Everglades swamps, but also a waste of money.

For years the long-awaited highway had been stalled at the western edge of Dade County and the southern boundary of Lee County, bogged down by difficult terrain and a chronic shortage of road construction money. The longest link, some 76 miles of the proposed highway, sat unfinished in (then) Lee County.

At this time, the state was running out of construction funds for the east-west portion and dropped the original deal. The following year, land entrepreneur Barron Collier, who had invested in millions of acres of cheap Southwest Florida wilderness, offered to bankroll the completion of the Tamiami Trail; like Jaudon, he needed that road to develop his holdings.

A shrewd businessman, Collier’s deal came only if Lee County would relinquish the land that he owned for the formation of a new county to be named after him. In addition, the road had to go through Collier’s new county, where, in 1923, there was not a mile of finished highway.

The publicity generated more controversy, and the unlikelihood of completing the road seemed to grow behind the lines of dissent.

In April 1923, the Tamiami Trail Blazers, convened at the western end of the Trail for a publicity stunt to call national attention to the project. Promising to use knowledgeable Seminole Indian guides, they announced their plan to forge across the swampy Everglades and prove the road could be built.

On April 4, 1923, the Trail Blazers left Fort Myers driving toward Miami across the vastness of South Florida. The motorcade consisted of nine vehicles, one tractor, 25 men and four women. Russell Kay, business manager of Florida Grower, was chief director of the stunt later called the Tamiami Trail Blazers Expedition.

Two Seminole Indians played major roles as guides, hunters and food gatherers: Conopatchee (Little Billie), who was the father of medicine man Josie Billie; and Assumhatchee (Abraham Lincoln Clay). Both were popular among the pioneers living in Lee and Collier counties.

Allen H. Andrews, a Koreshan Unity church member and expedition member, wrote about his experience during the “blazing” stage, which began immediately in the first hour after leaving. Andrews described the terrain as a land where “law and order are practically unknown, home only to the Seminoles and assorted moonshiners, bootleggers and other outlaws.”

As the expedition of mostly city slickers progressed through wet prairie, marsh, sawgrass and hammock islands, the group lost three vehicles, rendered “out of commission” by the muck. Andrews and the others relied on the knowledge of their Seminole guides to find water, food and the best route across the Glades.

Andrews commented on the constant need for fresh water: “To the writer the lack of good drinking water proved the greatest privation and there were frequent periods when one’s thoughts dwelt in anticipation upon the ice cream and cooling drinks one would get in Miami when the Trail’s end was reached – but when?”

As they reached the halfway mark from Fort Myers, Andrews also started to worry about food, which was “practically gone” at that point. His outlook brightened when Seminole guide Clay returned with a fresh-killed deer. Soon the men had boiled venison for dinner, sufficient to satisfy the “almost famished crowd.”

When the group hadn’t arrived in Miami on the expected date, rumors circulated that the Trail Blazers were lost in the Everglades and likely dead, giving the expedition daily national news coverage. Each day, airplanes scanned the rough terrain and rescue parties were dispatched from both sides to find them.

On April 10, The Miami Herald ran a story with the headline, “Rain Dashes Only Hope of Trapped Party – Believe All Have Perished.”

But at this point, a week out from Fort Myers, the Trail Blazers had actually reached dense stands of cypress, which they had to first chop away with axes and hatchets and then send a delegation back for the cars.

Realizing they were late, the group sent Seminoles Clay and Billie to run ahead on foot to let people in Miami know they were still trekking through the swamp. Kay recounted how the motorcade rejoiced when they heard the “whir of a motor” from an airplane passing overhead. The plane returned to drop off much needed supplies, courtesy of the Miami Chamber of Commerce.

With the news of the Trail Blazers’ demise proven false, the group continued to pick its way across southern Florida.
After 19 days of trekking, the first 11 Trail Blazers arrived in Miami and were welcomed as heroes. The rest, including the two Indians and the remaining cars and tractor still in the Glades, were several days behind. The hikers told enthusiastic reporters they had encountered no mosquitoes, and only one alligator and three deer, though numerous panthers had stalked them throughout the trip.

They had built 10 bridges and lost one car, repaired the others using cypress wood and palm fronds, and drank muddy water. The Seminoles taught them how to make corncob pipes and prepare and eat swamp cabbage and cattail roots.

“Sometimes it would take us three or four hours to pick out a suitable route. When we would go into the cypress land we would almost touch a moccasin at every step. Our Indians were barefoot but they paid the moccasins scant attention,” Kay wrote.

Twenty-three days after departing, the rest of the bedraggled crew emerged from the swamp. The Trail was going to be even more difficult to build than had been imagined, but the adrenalin furnished by the expedition infused the project with positive energy.

A parade and reception was held on Flagler Street to commemorate the historic trip. Andrews credited himself and his fellow Trail Blazers with focusing the attention of millions of Americans on the ambitious highway project. He gave a nod to the legacy of the Trail Blazers who “proved the healthfulness and fertile character of the country” and stimulated the investment of “many thousand dollars” to complete the project.

Soon after the Trail Blazers Expedition, the Florida legislature endorsed the construction project for the Tamiami Trail. They accepted Collier’s “deal.” In October 1923, work on the Trail began along the route blazed by the motorcade. Collier put together an army of engineers and road builders in Everglades City – the new county seat. He backed a $350,000 loan to get the project started.

The Tamiami Trail took 13 years and cost $8 million – $25,000 per mile – and opened on April 25, 1928. For the first time, motor vehicles could travel by road across the southern tip of Florida which opened Collier County to future economic development and thousands of new homebuyers. For the grand opening, a motorcade of 500 cars made its way down from Tampa, followed by the heroic Trail Blazers.

Seminole and Miccosukee Indians, hundreds of whom had lived in self-exiled wilderness squalor since the Seminole Wars, moved onto high ground to build villages on the road spoil and take advantage of the tourists and their dollars. The Seminole economy of those days exploded with sales of clothing, dolls and other arts and crafts. Alligator and other wildlife shows further helped the Seminoles cash in on their reputation as “Unconquered.”

Soon, it was hard to find any tourist attraction, anywhere in Florida that did not have a living village or other Seminole-themed attraction.