Hello! Welcome to the first installment in our 8 week series highlighting Seminole Tourism, past and present. In this series, we will be showcasing how tourism has been a key part of the Seminole entrepreneurial spirit for over a century using articles from The Seminole Tribune. Read the original article here.

Over the past several months I have been going through the photographs of Seminole Tribal members which date back to the beginning of the Tribe’s establishment on August 21, 1957, and before.

This year is the 62nd anniversary! The earlier years of the 20th century were photographed by either missionaries or teachers that lived throughout our reservations; Brighton, Big Cypress and Hollywood (called Dania), the headquarters for the United States agency, the Bureau of Indian Affairs. (Several photographic collections are included).

Born in 1955, many of my memories come from the Seminole Okalee Indian Village and Arts and Crafts Center – the Tribe’s first business venture.

It was located on the corner of State Road 7 (441) and Stirling Road where the Hard Rock Hotel and Casino stands today.

In 1960, tourism was what the Tribal members were accustomed to for economic gain. Many families had formed together to make this a quality tourist attraction known as the “only deep water alligator wrestling in the world.”

While the tourist attraction created jobs, many families were still promoting the Seminole lifestyle through other tourism attractions, such as the Jungle Queen sightseeing tour boat that brought tourists along the New River waterways throughout Fort Lauderdale.

Before these Fort Lauderdale attractions, Miami Beach was the haven for tourism with Musa Isle Indian Village among other tourist sites that featured the Seminole Indian lifestyle. (There are photographs of these sites).

North Florida had Silver Springs in Ocala, which families were involved in. This became a place established by Seminole tourism and then changed into a movie set location which many Seminole families were a part of.

But once the Seminole Okalee Village and Arts and Crafts was established, many of the tourism sites closed down and the tourism was centered among the newly established Indian reservations, including the Miccosukee Tribe along U.S. 41 (Tamiami Trail) and the Brighton Reservation. 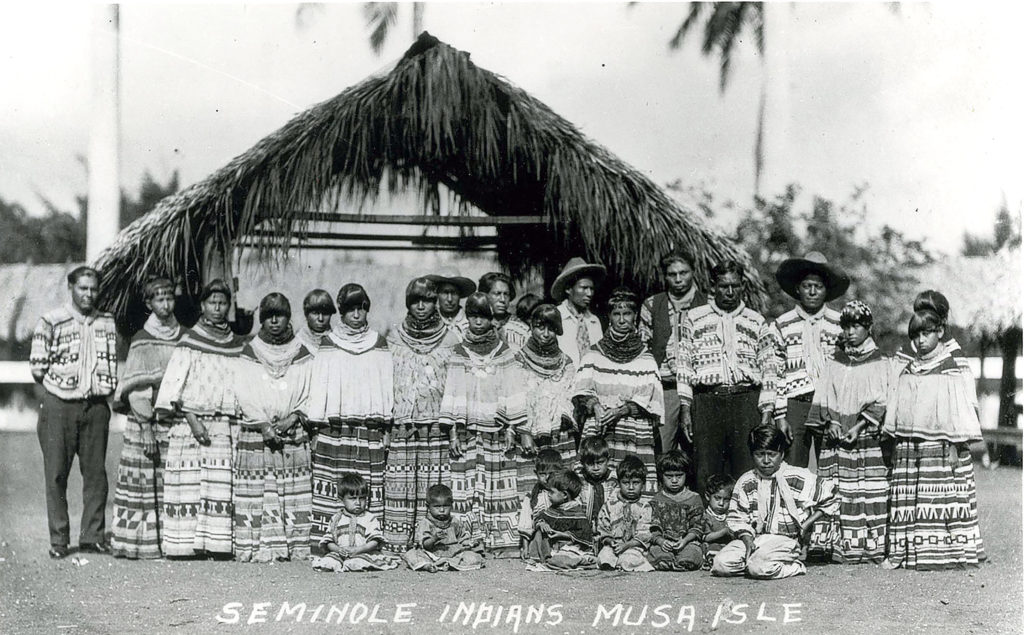 In 1976, all the stories we had heard about the Seminole lands taken by the U.S. government during the War became “truth.”

The United States government and the Seminole Tribe of Florida came to an agreement about the lands taken and the price to be paid per acre (3 cents) which yielded 16 million dollars.

These lands were in the Ocala area and across the state and down to South Florida. Both the Seminole Tribe of Florida and the Seminole Nation of Oklahoma were included in the settlement.

The outcome of the settlement was a greater focus on self-reliance as the government was now out of the Tribe’s future with that final purchase of lands in 1976.

Economic enterprise was the way for many that at one time relied on just tourism.

As the Tribe looked ahead, many of the young people, educated now, began to change the landscape of economic growth, keeping tourism at the forefront and adding gaming with culture.